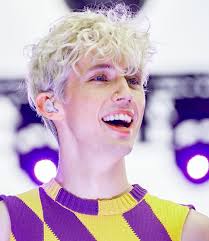 Troye Sivan Mellet, born June 5, 1995, better known as Troye Sivan, is an Australian singer, songwriter, actor and YouTuber. He got a contract with EMI Australia in 2013 after becoming well-known as a singer on YouTube and in Australian talent shows. In 2014, he released TRXYE, his third extended play, which reached at number five on the US Billboard 200.

Troye Sivan was born in Johannesburg, South Africa, the son of Shaun Mellet, a businessman, and Laurelle Mellet, a housewife and former model.

Sivan was raised in Perth, Western Australia, along with his parents, three siblings, and other relatives.

His mother converted to Judaism, and his father was born into an Orthodox Jewish family of Lithuanian-Jewish ancestry; he does not consider himself to be religious.

He adopted Sivan as his last name, which is a Hebrew month.

Troye Sivan signed a contract with EMI Australia in 2013 after becoming well-known as a singer on YouTube and in Australian talent shows.

In 2014, he released TRXYE, his third extended play, which peaked at number five on the US Billboard 200. On the Australian music charts, its lead song, “Happy Little Pill,” peaked at number 10.

His debut studio album Blue Neighbourhood, whose lead track “Youth” became his first single to enter the top 40 of the Billboard Hot 100 list and peaked at number 23, was released in 2015 after his fourth extended play Wild.

In Australia and on the Billboard 200 list, his second studio album Bloom (2018) peaked at number three and number four, respectively. “My My My!” the album’s lead track, rose to the top of the Billboard Dance Club Songs list for the second time for Sivan.

Troye Sivan is a famous Australian singer, songwriter, actor and YouTuber with a net worth of $8 million.

On August 7, 2013, Sivan publicly came out as gay in a YouTube video, three years after telling his family. He has Marfan syndrome in a modest form.