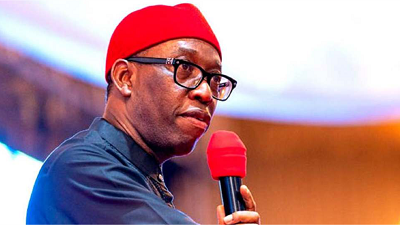 Ifeanyi Arthur Okowa, born July 8, 1959, better known as Ifeanyi Okowa, is a Nigerian politician who is the current Governor of Delta State. He was chosen by Atiku Abubakar, the presidential candidate of the People’s Democratic Party (PDP), as his running mate in the 2023 general elections.

Okowa was born in the Delta State town of Owa-Alero, in the Ika North-East Local Government Area. He studied medicine and surgery at the University of Ibadan, graduating with an MBBS degree in 1981.

He attended Edo College in Benin City from 1970 to 1976. He worked as a Medical Officer for the Bendel State Hospitals Management Board after leaving the National Youth Service Corps.

In 1986, he started his own business as the Director of Victory Medical Centre in Igbanke.

Ifeanyi Okowa is the current governor of Delta State. After winning the state elections in April 2015, he was sworn in as governor on May 29, 2015.

He was elected senator for Delta North Senatorial District in Delta State, Nigeria, in the April 2011 national elections, prior to becoming governor

He ran on the platform of the People’s Democratic Party (PDP). He is an Ika from the Delta State town of Owa-Alero. He is also the first person from Anioma to be elected as the governor of Delta State.

On May 29, 2019, he was re-elected governor of Delta State. On June 16, 2022, he was chosen as Atiku Abubakar’s running mate for the 2023 election by Atiku Abubakar, the Presidential candidate of the People’s Democratic Party (PDP).

Okowa resigned to run for governor of Delta State in the 2007 PDP governorship primaries, but he did not win. Ifeanyi was appointed Secretary to the Delta State Government in June 2007.

With 942 votes, Ifeanyi was elected Delta North Senatorial candidate in the PDP primaries in January 2011, but the outcome was disputed by party officials who preferred Marian Amaka Alli.

According to reports, tensions over the January 2013 election are still present. On December 8, 2014, Ifeanyi ultimately won the PDP ticket for the 2015 governorship election with 406 votes.

In April 2015, he received 724,680 votes in the Delta State gubernatorial elections.

He was sworn in as Governor on May 29, 2015, and has since commenced his duties.

Okowa, a member of the Peoples Democratic Party, received 925,274 votes in the March 9, 2019 governorship election, defeating the All Progressives Congress candidate, Great Ogboru, who received 215,938 votes.

Ifeanyi Okowa is a popular Nigerian politician with an estimated net worth of $5 million. He is the current governor of Delta State and the running mate to PDP’s presidential candidate, Atiku Abubakar.

Dr Ifeanyi Okowa is happily married to Her Excellency Dame Edith Okowa, who is the first lady of Delta State.

They have been married for 35 years and the marriage is blessed with children, three girls and a boy. Marilyn Okowa, Mildred Okowa are among Dr Ifeanyi Okowa’s children.