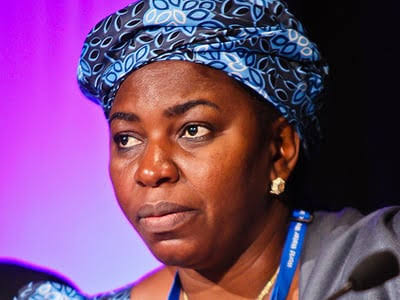 Sarah Reng Ochekpe, born October 4, 1961, better known as Sarah Ochekpe, is a Nigerian politician and former Minister of Water Resources. She hails from Plateau State, where she was born and raised before she became popular.

Mrs Ochekpe is one of the most talked about Nigerian politicians who have made headlines due to their achievements and controversies.

Sarah Ochekpe has held different political positions including Minister for Water Resources from 2011 – 2015.

Sarah Ochekpe was born to the family of Ali Reng Madugben in Foron, a district of the Barikin Ladi Local Government Area of Plateau State.

She had her primary and secondary education in Plateau State where she obtained her First School Leaving Certificate and O’Level certificate.

Mrs Ochekpe was admitted to the prestigious Ahmadu Bello University, where she graduated with a degree in Political Science.

Sarah Ochekpe also has post-graduate qualifications from Aberdeen College of Commerce and the Nigerian Institute of Journalism.

Sarah Ochekpe occupied several directorial roles in the National Orientation Agency (Nigeria), before she was appointed a minister.

The political scientist created impact during her time in government, increasing the level of accessible water for Nigerians to 70%, and created and rehabilitated artificial waterways that reduced flooding and alleviated unemployment.

She was the Minister for Water Resources, a position she held from 2011 to 2015. Plateau State Universal Basic Education Board (PSUBEB) in office from 2007 to 2011.

She was also the Executive Director of Administration and Finance at the National Orientation Agency (Nigeria) from 2001 to 2004.

In 2017, Sarah Ochekpe was accused of money laundering and conspiracy worth 450 million Naira alongside two other people.

Sarah Ochekpe is a popular Nigerian politician and former Minister for Water Resources. She has an estimated net worth of $10 million.

The husband is a professor of pharmaceutical chemistry and deputy vice chancellor at the University of Jos.