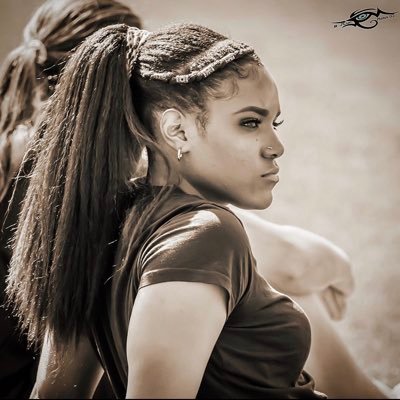 Patricia del Carmen George, born on December 18, 1996, is an American-born Nigerian footballer who plays as a forward for German Frauen-Bundesliga club SC Sand and the Nigeria women’s national team.

Patricia George as she is widely called, is one of the sexiest footballers in the Nigerian Female National Team (Super Falcons). The Nigerian football queen born in Chicago is inspired by his family, which has embraced sports so much. She currently plays for the Super Falcons with Jersey number 15

Patricia is one of the promising stars introduced into the Nigerian female team by the current coach, who seems to have fulfilled her dreams of competing for the Super Falcons and paved a way for her to uphold a family tradition.

Being able to finally play for the Super Falcons is a dream come true for George, who said, “My ambition as a soccer player is to get to the highest level, and I’m here to do that with Nigeria and also be the best I can be.”

George was raised in Chicago, Illinois. She was born to a Nigerian father, Phillips George and a Venezuelan mother, Florencia Chilberry who met at Wichita State University in the US where they both secured Athletic scholarships, and were standout 400m runners.

While growing up, Patricia already knew at an early age that she was going to do sport but didn’t take it seriously until later while at the University of Illinois. Naturally, many expected her to do Track and Field just like the rest of her family but Patricia George took to other sports like Wrestling, and around the age of six, was introduced to Football, coached by her father.

George has attended the Von Steuben Metropolitan High School in Chicago and the University of Illinois at Urbana–Champaign which ranked as the 207th largest metropolitan statistical area in the U.S with a population of 222,538 as of the 2020 U.S Census.

George is quite versatile as she can operate from the defense as well as forward positions. She currently plays as a forward for German Frauen-Bundesliga club SC Sand who are currently 11th on the Frauen-Bundesliga table , even though she thrives more in the left wing back position where her pace and strength is most suited.

She had previously played for the Chicago Red Stars in the American Women’s Premier Soccer League (WPSL), before being signed by the German outfit club in July 2020. George scored one goal in the seven matches she played for the club in the 2020/21 season.

Patricia made her debut in the green and white Jersey on the 76th minute when she replaced Halima Ayinde after she picked up a knock in the 2021 Turkish Women’s Cup match against Russian Club, CSKA Moscow in which Nigeria clinched a 1 – 0 victory, a goal scored by Chinwendu Ihezuo.

After the match, the Nigerian International expressed her joy and gratitude by tweeting on her twitter page as shown below. Two days later, she was part of the Nigerian team that faced Uzbekistan.

In the current football season (2021 – 2022), Patricia George has played 16 league matches and scored just a goal from the penalty spot.

Patricia has athletic parents and siblings. Her talent apparently comes from her parents Phillips (Nigerian) and Florencia (Venezuelan) who met at Wichita State University in the US where they both secured Athletic scholarships, and were standout 400m runners. In fact Chilberry is a former National Record holder in the women’s 400m for Venezuela with a Personal Best of 53.1s.

Her older brother Patrick played Football at Gordon Tech and Northern Illinois University , while also starring in track where he ran a time of 10.40s in the 100m. Her sister Phyllis also did some track and played soccer at Arkansas.