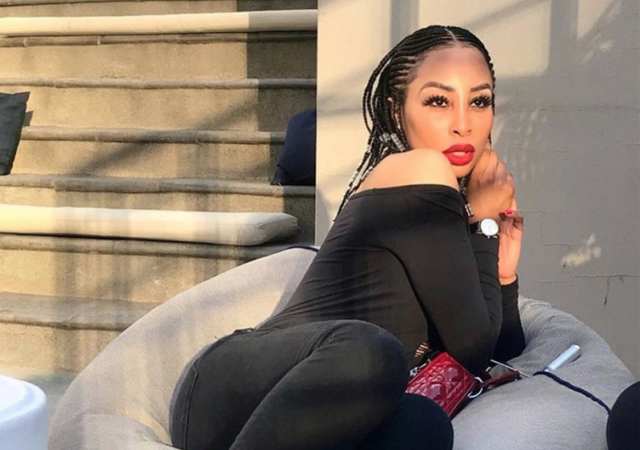 Khanyisile Mbau was born on October 15, 1985 in Soweto, South Africa with the stage name Khanyi Mbau. Her mother, Lynette Sisi Mbau worked in the finance department of the pension fund at Barclays Bank. However, she retained her mother’s surname, Mbau. Khanyi Mbau, is a South African actress, musician, television presenter and socialite.

Khanyi Mbau is undoubtedly one of the top South African celebrities living an A-List lifestyle. From luxurious cars, clothing brands, houses and fantastic getaways, she goes for the creme de la creme in life.

Khanyisile Mbau was born on 15 October 1985. Her mother, Lynette Sisi Mbau, worked in the finance department of the pension fund at Barclays Bank.

Her father, Menzi Mcunu, and her mother were not married to each other as at that time but were only dating.

Mcunu had no claim to the child but he still gave her the named, Khanyisile which means “one who brings light”.

Mbau kept her mother’s surname. Lynette soon left baby Khanyi with her parents in Mofolo, Soweto, and returned to work, leaving her grandmother to virtually raise her.

Mbau’s grandparents were very Western in the way they dressed and saw the world. Her grandmother ran her household with the decorum and attention to detail as the Queen of England.

She attended what was supposed to be an all-white crèche called Flock on Eloff Street before enrolling at Bedfordview High School for her secondary school education.

Khanyi Mbau began her acting career in the Muvhango series after the demise of actress Lindiwe Chibi. She was told to quit the role for her inconsiderate attitude towards the progress of the series.

She reportedly traveled outside the country to the Middle East without giving notice as Muvhango was still filming.

After her participation on the SABC2 soap opera came to an end, Khanyi joined the SABC1 hit drama series Mzansi in 2006, playing the role of Mbali.

Following the cancellation of the series, she moved to join the cast of After 9, another SABC1 drama series in 2007.

In 2011, the actress featured alongside Bonang Matheba, JR, Tatum Keshwar, Dionne Song, Snotkop, and Loyiso Gola in the third season of the famed reality show, Tropika Island, which took place in Phuket, Thailand.

In March 2018, Mbau joined the cast of South Africa’s most-watched TV show, Uzalo, on SABC 1, portraying the role of go-getter Dinekile aka Lady Die who is a shoplifter by trade and aspires for a lifelike her cousin MaNgcobo.

Having done short stints in jail for petty crimes and knows her way around the underworld, she has not achieved what she wants yet. In July 2019, Mbau announced her return to the show for its 5th season.

In 2016, Mbau became the host of a radio show on Metro FM, Whose show is it anyway, alongside entertainers Somizi Mhlongo and Ntombi Ngcobo.

The show premiered nationally on July 18, 2016, and ran for a year until it came to an end after the station was reshuffled.

Mbau’s first feature film, Happiness is a Four-letter Word, premiered on February 19, 2016. She played the role of Zaza, trophy wife to Bheki (Simo Magwaza), mother of two, and owner of a shoe store.

The film premiered with box office-smashing numbers and continued with gross box office receipts over R7 million in its third week on the cinema circuit.

In October 2016, the Johannesburg Film Festival named Mbau among their top 10 South African actresses in film, following the success of Happiness Is a Four-letter Word. Mbau’s second film, a thriller titled The Red Room, was set for cinema release in 2018.

In 2017, Mbau began production of her third film, Frank and Fearless with filmmaker and comedian Leon Schuster,  which was set for cinema release in 2018.

Khanyi has involved in so many movies/series and in 2019, she won an award of Best Actress by South African International Film Academy Awards

In November 2018, Mbau announced the launch of her own brand of gin called “I Am Khanyi” – Millennial Shimmer Gin

Khanyi Mbau is a South African actress, singer, and television presenter with a net worth of around $10 million.

Khanyi’s most famous relationship was with Mandla Mthembu, who was 50 years old when they first got together.

As at the time, Mbau was 20 years old. They eventually got married when the then twenty-year-old dainty damsel was four months pregnant with his child.

On the 24th of December, 2006, they welcomed a daughter but three years after, precisely in 2009, the couple divorced and Khanyi Mbau began dating 51-year-old married millionaire, Theunis Cronus.

One year after, her relationship with Cronus, they separated.

The next man she went on to publicly acknowledge as being her boyfriend was musician Tebogo Lerole, who was quite young compared to the types of men she has dated in the past.

They started dating in 2011 and their relationship lasted till January 2018.