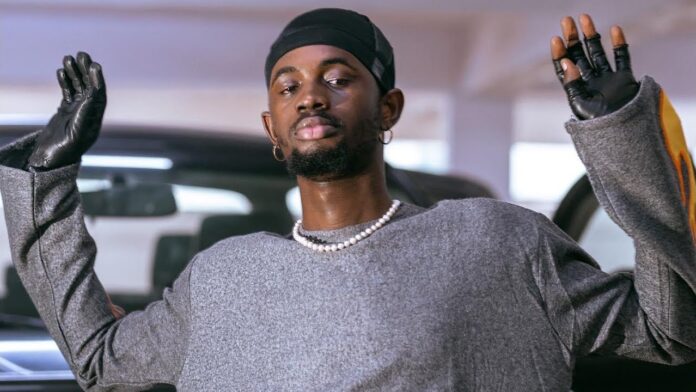 Black Sherif was born in Ashanti Region of Ghana where he originally hails from but was raised in Konongo town both in Ghana.

He came into prominence in March 2022 following the success of his new single “Kwaku The Traveler,” which topped several charts a few days after it was released.

Black Sherif was born into the Muslim family of Mr. Frimpong and Mrs. Ante Marie in the city of Ashanti Region in Ghana. Although the singer and rapper were raised in Konongo town, Ghana.

Growing up was rosy as the singer was not opportune to a rich lifestyle, but that didn’t stop him from making it big in the music industry and becoming one of the biggest musical artists in Ghana.

Black Sherif is a fan of Nigerian Afrobeats as he grew up listening to Nigerian and Ghanaian artists songs through the father radio which motivated him to go into music.

Black Sherif started and completed his primary education in a public primary school in Kumasi before he proceeded to Kumasi Academy for his secondary school education and obtained his West African Schools Certificate Examination in 2019.

After his secondary education, Sherif gained admission to study statistics at the University of Professional Services, but wasn’t familiar with the school, so he moved to the University Of Ghana where he is currently studying.

Black Sherif wanted to pursue a career in dance before he ventured in music which paved the way for him into the entertainment industry. He fell in love with Afrobeat which triggered him to start singing with the inspiration he gained from listening to Afrobeat songs on the radio.

Just after graduating from secondary school, Black Sherif released his debut single, Cry For Me in 2019. The song which announced his entrance into the Ghana music industry with fans expecting more from the singer.

In 2020, Sherif released another single “Money” which was a massive success in Ghana, making waves all over the place, making him the talent to watch out for with much anticipation from good music lovers.

Black Sherif proved once again that he is not a one-hit wonder by releasing another single titled “First Sermon”. The song brought him fame and his social media followers increased.

He went on to dropped the fellow-up single titled “Second Sermon” which did wonders and earned him a collaboration with Nigerian afrobeat singer and Grammy award-winning singer, Burna Boy on the “Second Sermon Remix” which was released on December 8, 2021.

On March 31, 2022, Black Sherif took the music industry by storm by releasing “Kwaku The Traveller,” a song which is on the lips of every African youth. Kwaku The Traveler did numbers and climbed to the number one spot in Nigeria and Ghana’s Apple Music Charts.

The hard work of Sherif paid off as he bagged the award for Entertainment Personality Of The Year at the 2022 Entertainment Achievement Awards.

During the 2022 3Music Awards, Black Sherif went home with three awards; Hip Song Of The Year, Breakthrough Act Of The Year and Hiplife/Hip-hop Artiste Of The Year.

The net worth of Black Sherif is an estimated $1 million. He is one of the richest and fastest rising Ghanaian musicians. Sherif makes money through the royalties from his music after rising to stardom. He earns money through massive streams of his music on digital stores.

The Trap music superstar, Black Sherif has sounded that he is not in a relationship, stating that he wants to focus on his career, especially now that he is at the peak of his career.

Black Sherif is not yet married but hopes to have his own family someday. When the time is right, he will settle down. He is a friend to Nigerian dancer, Poco Lee who introduced him to Burna Boy which led to their collaboration on the “Second Sermon Remix”