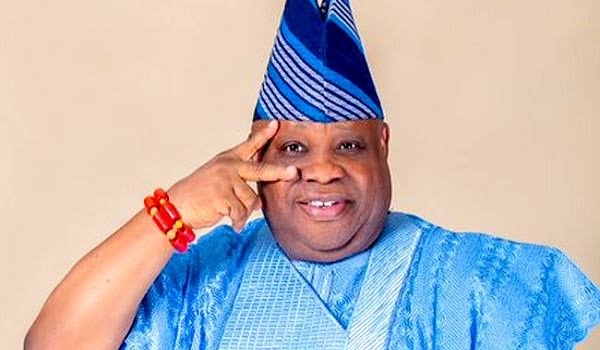 Ademola Nurudeen Jackson Adeleke, born May 13, 1960, better known as Ademola Adeleke, is a renowned Nigerian politician and businessman. Since 2022, he has been the governor of Osun State. From 2017 to 2019, he served as the senator who represented the Osun-West senatorial district. He comes from the Ede, Osun State, Adeleke family.

Before moving to the United States, he completed his secondary education at Ede Muslim Grammar School after moving on to The Seventh Day Adventist Secondary School, Ede, also in the then-Old Oyo State.

He joined his two other older brothers in the United States of America when he departed Nigeria to further his studies.

In the United States, he began his academic education at Jacksonville State University in Alabama, where he majored in criminal justice and minored in political science.

He returned to school and enrolled at Atlanta Metropolitan State College in the United States after considerable controversy surrounded his educational background.

In 2021, he graduated with a Bachelor of Science in criminal justice from Atlanta Metropolitan State College.

Adeleke is a businessman and administrator. From 1992 to 1999, he served as an executive director of Guinness Nigeria Plc, where General Theophilus Danjuma was one of his co-directors.

From 2001 to 2016, he served as the group executive director at his brother’s company, Pacific Holdings Limited.

Ademola had previously served as a service contractor with Quicksilver Courier Company in Atlanta, Georgia, US, from 1985 to 1989 before joining Pacific Holdings Limited.

From 1990 until 1994, he served as vice president of Origin International LLC, an Atlanta, Georgia, US-based manufacturer of flavors and fragrances.

Adeleke is a humanitarian and member of the community.

Together with his late brother, Senator Isiaka Adeleke, who passed away in April 2017, Adeleke began his political career in 2001.

After his brother passed away in 2017, he ran in the Osun West by-election and won under the People’s Democratic Party.

Up until April 2017, Ademola belonged to the All Progressives Congress before switching to the People’s Democratic Party.

On July 23, 2018, Adeleke defeated Akin Ogunbiyi by seven votes to win the PDP’s nomination for governor of Osun State.

Ademola Adeleke is a renowned Nigerian politician and businessman who has amassed an estimated net worth of $560 million.

Ademola Adeleke is a father of eight children, including B-Red, Ayootola, Goke, Sina Rambo, Adenike, Folasade, and others.

He is married to the stunning Mrs. Titilola Adeleke. He is also the uncle of Nigeria superstar, Davido.