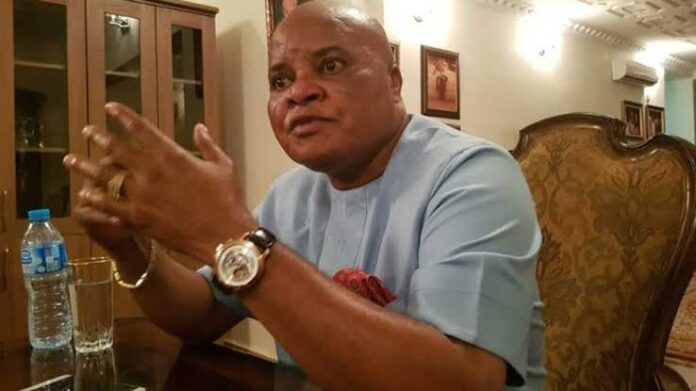 We bring you Ifeanyi Ararume’s biography, which contains all the relevant information you need to know about the Nigerian politician.

Ifeanyi Ararume was appointed to the new NNPC board by President Muhammadu Buhari in September 2021.

Ifeanyi Ararume was elected as Senator for Okigwe Constituency, Imo State under the platform of the People’s Democratic Party, PDP.

He was appointed to committees on communications, police affairs, federal character, finance & appropriation, information, and the Niger Delta (vice chair).

Ifeanyi Araume was born in Isiebu, Umuduru in Isiala Mbano Local Government Area of Imo State, Nigeria, where he hails from.

His father was the late Marcus Araume while his mother was Grace Araume (Nee Anyiam).

He obtained a Bachelor of Science degree in business administration from Liberty University in Lynchburg, Virginia and a Master of Science Degree (M.SC) in International Relations from the University of Benin.

Senator Araraume started his political career in the 1990s. He served in different positions, including as State Treasurer for the Liberal Convention in old Imo State between 1988 and 1989.

He joined the National Finance Committee of the defunct National Republican Convention (NRC) created by former military dictator General Ibrahim Babangida between 1990 and 1993.

He was also the Chairman of the NRC Presidential Primaries for Kwara and Delta States.

Ararume was elected as a Senator representing the Imo North (Okigwe) constituency of Imo State, Nigeria in 1999 under the platform of the People’s Democratic Party (PDP) and was re-elected in 2003 after his first tenure in office.

He joined the Action Congress of Nigeria (ACN) and contested the gubernatorial election in 2011 but lost to Rochas Okorocha of the All Progressives Grand Alliance (APGA).

Ararume rejoined the Peoples Democratic Party and contested for its gubernatorial nomination in 2015, which he also lost to Chukwuemeka Ihedioha.

He later left the PDP for the All Progressives Congress (APC) and joined with the incumbent governor, Rochas Okorocha, during the 2015 governorship election.

Senator Ararume left the ruling party APC and joined APGA on September 5, 2018, where he contested the gubernatorial nomination.

Ifeanyi Ararume is a top Nigerian politician with an estimated net worth of $5 million.

Ifeanyi Ararume is married to Lady (Barr.) Gladys N. Araraume, and they have children together. The couple are said to be living happily while enjoying their marriage.