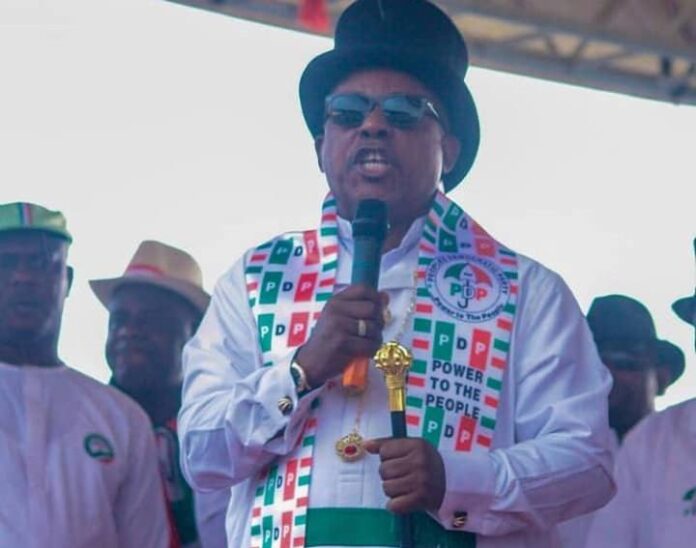 Here is Uche Secondus biography with all the information you need to know about the popular Rivers State born politician.

Uche Secondus is undoubtedly one of the highly regarded businessmen and politicians in Nigeria, having served as the People’s Democratic Party (PDP) for years.

Uche Secondus was born in Andoni, a local government in Rivers State, the South-South region of Nigeria, where he hails from. He is from the Obolo ethnicity.

Prince Uche Secondus had his elementary and secondary education in Rivers State, where he obtained his First School Leaving Certificate (FSLC) and Senior Secondary School Certificate.

Upon completing his secondary school education, Uche Secondus furthered his education at the London Chambers of Commerce Institute, obtaining a certificate in Commerce.

Uche Secondus joined politics at an early age in 1978, in a bid to improve the lives of the Riverians.

He previously served as the Rivers State Youth Leader of the National Party of Nigeria (NPN).

He also held the position of Rivers State Publicity Secretary of the National Republican Convention (NRC) and served as the Chairman of the Rivers State People’s Democratic Party for two term.

Prince Uche Secondus holds a record as the best PDP chairman because the opposition party won more states during his tenure.

Secondus was the South-South Coordinator for the PDP National Campaign Council in 2007, which organized the party’s campaigns during that year’s general elections.

At the People’s Democratic Party (PDP) Convention in 2008, he was promoted to National Organizing Secretary, a position he held until 2012.

Secondus is the first Chairman of the National Identity Management Commission’s Governing Board (NIMC). He was elected Deputy National Chairman of the People’s Democratic Party on September 1, 2013.

Secondus was elected the PDP National Working Committee chairman on December 10, 2017, the event which took place at Eagles Square, Abuja.

Prince Uche Secondus is a Nigerian businessman and politician with an estimated net worth of $5 million.

Uche Secondus is happily married to Ene Belema Secondus, and they have children together.

Uche Secondus is a strong politician and a successful businessman never relent efforts in helping his beloved political party.

He has made the Andoni and the entire Obolo proud.