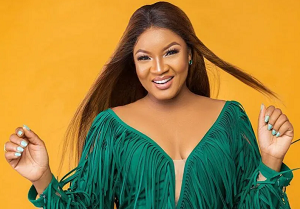 Omotola Jalade Ekeinde MFR, born February 7, 1978, better known as Omotola Jalade, is a Nigerian veteran actress, singer, philanthropist, and former model. Ekeinde has acted in over 300 films since her Nollywood debut in 1995, with millions of copies sold.

Omotola Jalade was born in Lagos State and is of Ondo origin. Her parents and two younger brothers, Tayo and Bolaji Jalade, raised her.

Omotola Jalade attended Obafemi Awolowo University for a semester before completing her education at Yaba College of Technology, where she studied Estate Management from 1996 to 2004.

She had intended to pursue a career in business management. While waiting for her university results, she began modeling to supplement her income.

Omotola Jalade Ekeinde was named to Time magazine’s list of the world’s 100 most influential people in 2013.

She was made a Member of the Order of the Federal Republic (MFR) by the Nigerian government in 2014 for her contributions to Nigerian cinema.

While accompanying a friend to an audition, Omotola Jalade got introduced to acting. Reginald Ebere directed her first acting part in the 1995 film Venom of Justice.

She was cast as the film’s leading lady. Her first notable part was in the 1995 film Mortal Inheritance, in which she played a sickle-cell patient fighting for survival against slim chances.

She has appeared in a number of films since then, including Games Women Play, Blood Sisters, All My Life, Last Wedding, My Story, The Woman in Me, and others.

She won “Best Actress in an English Speaking Movie” and “Best Actress Overall” at the 1997 Movie Awards for her role in Mortal Inheritance. She was the youngest actress to win in Nigeria at the time.

She starred in many sequel films in the late 1990s and early 2000s, including Lost Kingdom II, Kosorogun II, and Blood Sister II, which earned her a grand achiever award from the Global Excellence Recognition Awards in 2004.

In 2005, she won the Africa Movie Academy Award for Best Actress in a Supporting Role.

Jalade got her first big movie part in the 2010 film “Ije,” after shooting over 300 video movies. The film was shot in Jos, Nigeria, and the United States.

At the time, “Ije” was the highest-grossing Nollywood film, a record that was eventually surpassed by Phone Swap (2012).

She starred in the Nollywood thriller Last Flight to Abuja in 2012, which went on to become the second highest-grossing film in West African cinemas. She went on to win more than forty national and international accolades.

Omotala Jalade began her musical career in 2005, when she released her debut album, “gba.” The singles “Naija Lowa” and “The Things You Do To Me” were released from the album.

Paul Play and Del B collaborated on her unreleased second album, Me, Myself, and Eyes. “Feel Alright,” featuring Harrysong, and “Through the Fire,” featuring Uche, provided support.

Jalade recruited the aid of The Bridge Entertainment to start production on her third album in late 2012. She traveled to Atlanta, Georgia to work with producers and composers who may help her establish a sound that would appeal to American audiences.

She recorded a song with vocalist Bobby V and had studio sessions with Kendrick Dean, Drumma Boy, and Verse Simmonds.

In 2012, Jalade debuted Omotola: The Real Me, a reality television show on Africa Magic Entertainment, an M-Net subsidiary that airs on DStv.

She made history becoming the first Nigerian celebrity to have a reality program of her own.

Omotola Jalade Ekeinde is a veteran Nigerian actress, filmmaker and philanthropist with an estimated net worth of $7mllion.

“Omotola’s Diary,” a regular piece in OK! Nigeria Magazine, offers essays about Ekeinde’s life and experiences. She earned the Ebony Vanguard Award at the Music Video and Screen Awards (MVISA) in Birmingham, England on November 5, 2013.

Oba Victor Kiladejo, the Royal King of Ondo Kingdom, bestowed a chieftaincy title on Omotola at her homeland of Ondo State on November 9, 2013.

CNN Travel named Ekeinde’s accent as one of the “world’s twelve sexiest accents” in 2012.

The Nigerian accent came in fifth place. She was named to Time magazine’s list of the world’s 100 most influential people in 2013.

In 2013, Jalade was named to New African magazine’s Top 100 Most Influential Africans list.

She was named one of the highest-grossing movie actors of 2015. Shah Rukh Khan, Frank Welker, Bob Bergen, Jack Angel, Mickie McGowan, Michael Papajohn, Martin Klebba, Clint Howard, and Chris Ellis were among the others on the list.

In 1996, Omotola Jalade married Captain Matthew Ekeinde. The marriage was blessed with four children, Princess, M.J., Meraiah Ekenide, and Michael. In 1991, she sadly lost her father.

In 2005, Jalade was appointed as a UN World Food Programme Ambassador, visiting missions in Sierra Leone and Liberia.

She also supports organizations that encourage teenagers and young women in society, such as Charles Odii’s SME100 Africa. She was involved in the Walk the World project and joined President Ellen Johnson Sirleaf in Liberia for the Walk the World campaign.

Her human rights activism is focused on her non-governmental organization, the Omotola Youth Empowerment Program (OYEP). Hundreds of young people came together for the Empowerment Walk and Convention as part of this project.

In 2010, she donated her voice to Save The Children UK’s “Rewrite The Future” campaign.

She became an Amnesty International campaigner in 2011 and has since taken part in campaigns in Sierra Leone (Maternal Mortality) and Nigeria’s Niger Delta, where she shot a video asking Shell plc and the government to “own up, clean up, pay up,” and take responsibility for the Niger Delta’s oil spills.

In June 2020, she accompanied Tanzanian actress Wema Sepetu to a Tanzanian orphanage run by Tanzania Mitindo House, which concentrates on HIV-positive children.

Ekeinde and performers (Dakore Egbuson-Akande, Daniel Effiong, Meg Otanwa, Michelle Dede, Osas Ighodaro) promised to cease smoking in their movie scenes to promote the 2021 World No Tobacco Day and the #SmokeFreeNollywood campaign, as it had a harmful impact on young people who looked up to them.

Tobacco-Free Kids, a US non-profit organization, and Gatefield, a sub-Saharan public planning consultancy, funded the campaign.