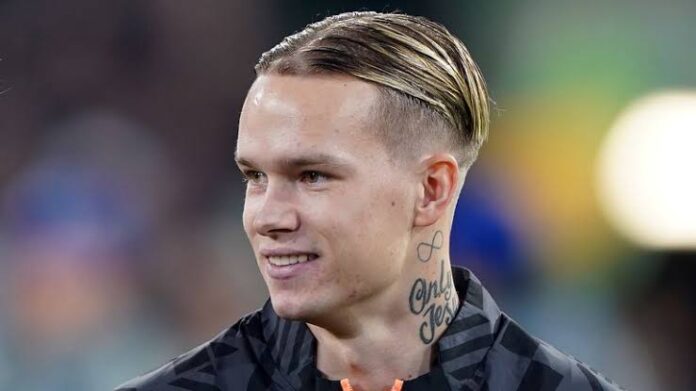 Mykhailo Petrovych Mudryk, born January 5, 2001, better known as Mykhailo Mudryk, is a professional Ukrainian footballer who plays as a winger for the Ukraine national team. He is an outstanding player who has attracted interest from top European clubs.

Mykhailo Mudryk was born in Krasnohrad, Ukraine, where he hails from and began his youth career.

He played nine games and scored one goal while playing for the Ukraine’s national under-21 football team in 2019. He scored the deciding goal from a free kick against Armenia on September 7, 2021.

In 2010, Mudryk began participating in football at Metalist Kharkiv. The Dnipro Dnipropetrovsk Academy was his next stop.

In 2016, he relocated to the Shakhtar Donetsk academy.

He participated for Shakhtar Donetsk’s U21 team during the 2018–19 campaign. He was a member of the senior team in 2018.

Paulo Fonseca gave him his senior debut on October 31, 2018, in a Ukrainian Cup game against Olimpik Donetsk. He was 17 at the time.

He spent the rest of the 2018–19 season on loan to Arsenal Kyiv of the Ukrainian Premier League, appearing in 10 games but recording no goals.

He made his UEFA Champions League debut on September 28, 2021, against Inter Milan at the NSC Olimpiyskyi in Kyiv, coming on to replace Manor Solomon in the 78th minute.

He competed on October 27 versus Chornomorets Odesa, and his group went to the quarterfinals of the Ukrainian Cup.

After putting on multiple impressive displays for Shakhtar, Mudryk caught the eye of several European clubs, including Sevilla and Arsenal.

He scored his first Champions League goal in a 4-1 away victory over RB Leipzig on September 6, 2022.

He was initially called to the Ukraine national football team’s training camp in Slovenia in April 2022, which took place between April and May of that year.

During the Global Tour for Peace, on May 11, 2022, he made his professional debut against Borussia Mönchengladbach and scored his first goal at the Borussia-Park in Mönchengladbach.

Mykhailo Mudryk is a talented Ukrainian player who plays as a winger. He has an estimated net worth of around $1.5 million.

He has frequently discussed how important faith is to him in conversations. He wishes to discuss God with everyone, yet he frequently restrains himself out of respect for others’ religious beliefs. According to him, “Only Jesus” is the greatest and most significant of all of his tattoos.