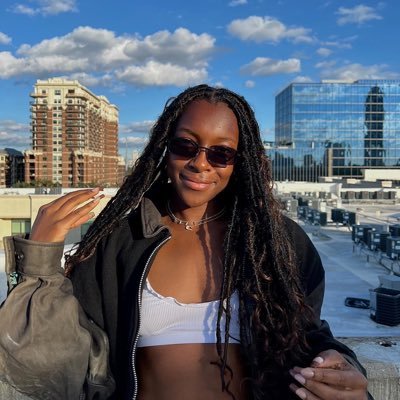 Michelle Chinwendu Alozie, born April 28, 1997, is an American-born Nigerian footballer who plays as a forward for National Women’s Soccer League team Houston Dash wearing the number 22 jersey and the Nigeria women’s national team, popularly called the Super Falcons with a jersey number of 22 as well.

The American-born Nigerian player was first called up to the Nigerian Women’s National Team in 2021 for the U.S. Soccer Summer Series and made her international debut at PNC Stadium against Jamaica, which the Super Falcons lost 0–1.

In the match against Jamaica, the Yale University graduate was arguably the standout player for the Super Falcons in their first two games at the 2021 WNT Summer Series as she was close to grabbing an equalizer but her left-footed screamer came off the crossbar in the closing minutes of the second half. A few days after her debut, Alozie scored her first international goal for the Super Falcons against Portugal.

Michelle Alozie really dazzled in her junior season at Yale, scoring nine goals, giving five assists and earning 23 points, and was named Co-Offensive Player of the Year in Ivy League.

Alozie was raised in Apple Valley, California, and was born to Chioma and Godwin Alozie on April 28, 1997. She Attended Granite Hills High School in El Cajon, California where she was a three-time all-conference performer (2012, 2013, 2015)

In high school, she set program records with seven goals in one game and 44 goals in a single season. Michelle also ran track for Granite Hills, breaking school records in the 100m and 200m dashes, as well as playing club soccer for Legends FC, capturing a national title in 2012.

Michelle’s life goal was to become a cardiologist, and she graduated from Yale University in 2019 with a bachelor’s degree in Molecular, Cellular, and Developmental Biology.

Alozie made her senior debut for Nigeria on June 10, 2021 as a 65th-minute substitution in a friendly match with Jamaica, which the Super Falcons lost 0-1. She made her Tennessee debut in the season opener against Fordham in 2019

During her youth career, she has played for Legends FC from 2011 to 2014. She thereafter moved to the Yale Bulldogs in 2015 and netted 19 goals in her 49 appearances for the team before she left in 2018 after her season was cut short due to injury.

In 2019, she left to Tennessee Lady Volunteers and made nineteen appearances finding the back of the net three times before moving to her current club, Houston dash in 2021

The makeshift defender received enthusiastic commendation from the Nigeria Women’s and University of Pittsburgh managers, Randy Waldrum, for her awe-inspiring display in the Falcons’ unfortunate loss to the USA when the Super Falcons played against the World No. 1 team, the USA, in Austin, Texas, in the US Summer Series tournament.

Michelle Alozie is a professional female footballer who has a net worth of about $1 million.

Super Falcons and Houston Dash center forward Michelle Chinwedu Alozie has disclosed that she has a crush on Super Eagles midfielder Alex Iwobi.

The 24-year-old international divulged the information that she is crushing on the Everton man in an Instagram Live conversation tagged “The Three Musketeers.”

” Just as we’ve got some tempting, beautiful, good looking ladies in the national team, we’ve got same in the Super Eagles of Nigeria. Have you got any crush among those players? said, ‘Alex Iwobi.”

Let us all hope the Nigerian Everton playmaker, who is the nephew of the inspirational and mesmerizing Jay Jay Okocha, will respond to this.