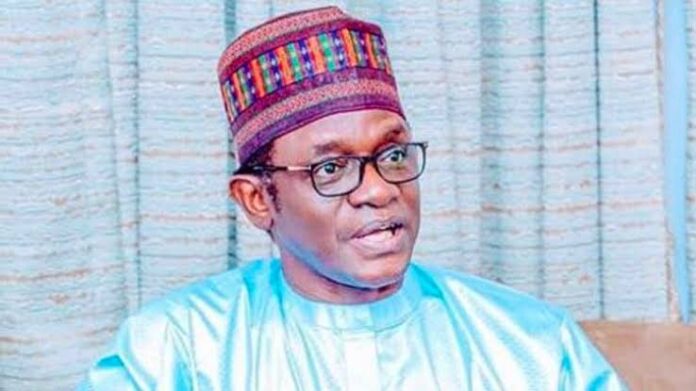 Mai Mala Buni, born November 19, 1967, is a Nigerian politician and the current governor of Yobe State and the former caretaker chairman of the All Progressives Congress. He was born in Buni Yadi, Gujba local government area of Yobe state, North East Nigeria, where he hails from.

Mai Mala Buni was elected governor during the 2019 Nigeria general elections under the platform of the All Progressives Congress (APC) party.

Buni started learning memorization of the Quran at an early age under the tutelage of his parents and other Muslim clerics before he was enrolled in Buni Gari central primary school, where he obtained the First School Leaving Certificate in 1979.

After his primary education, Buni gained admission into Government Secondary School Goniri in 1979 and obtained the West African Examination Council certificate in 1985.

He further enrolled as a part-time student at the Espan Formation University, Benin Republic where he obtained a B.Sc. Degree in International Relations in 2014.

He attended the College of Vocational Science and Technology, where he obtained a Diploma certificate in 2012.

Prior to becoming governor, he was the former national secretary of the All Progressives Congress (APC).

Mai Mala Buni started his career in the business of trade and transport, a business he joined at a young age after his secondary education.

He is the chairman of several companies including:

Mala began his political journey in 1992 when he contested and won a councilor position under the platform of the National Republican Convention (NRC) party to represent Buni ward in the Gujba Local Government Council and was elected as the speaker of the council.

In 2002, he became a senior legislative assistant in Nigeria’s National Assembly, and in 2004, he was appointed Member, University of Uyo governing council.

In 2006, he was unanimously elected Chairman of the Advanced Congress of Democrats in Yobe state.

In 2011, Buni Mai Mala joined the then ruling All Nigeria Peoples Party (ANPP) in Yobe state and was appointed Special Adviser on Political Affairs and Legislative Matters to Yobe state Governor Ibrahim Gaidam.

In 2013, Mai Mala Buni became state secretary of the party in Yobe state and was subsequently elected the pioneer state Chairman of the All Progressives Congress in Yobe state.

Mai Mala Buni became the first elected National Secretary of the All Progressives Congress in 2014.

While he was still serving as APC national secretary and board chairman of the Nigeria Shippers Council, he was nominated, endorsed and elected as flag bearer of APC for the 2019 Yobe State gubernatorial election.

During the 2019 general elections, Hon. Mai Mala was elected as the fourth Executive Governor of Yobe state defeating his opponent Alhaji Bello Iliya of the People Democratic Party (PDP).

Mai Mala Buni is a popular Nigerian politician and the current governor of Yobe state. He has an estimated net worth of $5 million.

Mai Mala Buni is married to different wives, although the names of his first wife and other wives have not been revealed.

The politician has been keeping his personal life outside the media maybe because of his political positions.