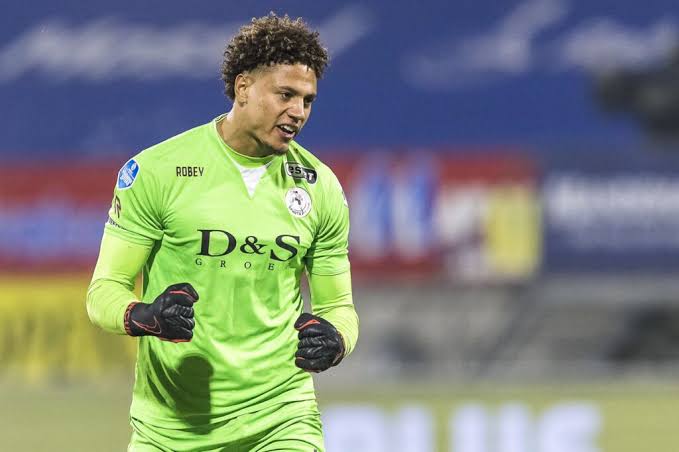 Maduka Emilio Okoye, born August 28, 1999, professionally known as Maduka Okoye, is a Nigerian professional footballer who plays as a goalkeeper. He was born in Düsseldorf, Germany, to a Nigerian father and a German mother. Maduka Okoye came into the spotlight after Watford FC of England signed him in November 2021.

Maduka Okoye is a talented footballer who is well known for his position in goal. He hails from the Southeastern part of Nigeria, born and raised in Düsseldorf, Germany.

His mother is a German, while the father is a Nigerian. The goalkeeper made the choice to play for his father’s land by choosing the Super Eagles of Nigeria. He is from the Igbo tribe.

Maduka Okoye began his career with Bayer Leverkusen in 2012, he came through the club youth system. Okoye joined Fortuna Düsseldorf, where he played for their youth senior team.

In July 2020, he signed for Eredivise side Sparta Rotterdam, where he was discovered by the Watford football club of England.

He was announced as a Watford player on November 9, 2021 and will join the Premier league club on a 5 year deal.

Okoye was immediately loaned back to Sparta Rotterdam until the end of the 2021/22 campaign.

Rohr invited Maduka for a friendly against Ukraine on August 14, 2019. On October 13, he made his international debut as a substitute in a friendly match against Brazil, which ended in a 1-1 draw.

Maduka Okoye is a Nigerian footballer who plays as a goalkeeper. He has an estimated net worth of $10 million.

Maduka Okoye is not yet married and has not revealed anything about his relationship. The youngster is having a good career and is focused on his goals after having signed for a new club.