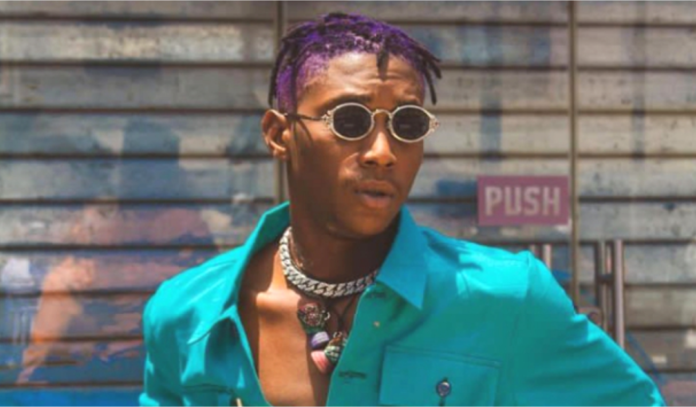 Akinbiyi Abiola Ahmed, born on January 27, 1997, professionally known as Bella Shmurda, is a popular Nigerian pop singer and songwriter. He is widely known for his song Cash App, featuring Zlatan Ibile and Lincoln. He hails from Lagos state, where he was born, raised and completed his primary and secondary education.

Bella Shmurda was born in Lagos state to the family of Mr and Mrs Ahmed. He is from the Yoruba ethnicity.

He was raised in Okokomaiko town, in the mainland part of Lagos and came from a Muslim family.

Bella Shmurda is a fast growing talented musician who has released several hit songs and became a threat to the big guns in the industry.

His debut single Vision 2020 produced by the legendary ID Cabasa was released in 2018 featuring popular rapper and YBNL boss Olamide on the remix.

Bella Shmurda became the wave of the moment after the remix of his song Vision 2020 gained massive acceptance from fans.

He further released Only You in 2019 which was produced by Bylinx. The single was another hit song which gave his fans assurance in him.

Without relenting effort, Bella Shmurda teamed up with Zlatan Ibile and Lincoln to deliver a sonorous song which topped charts days after it was released in 2020.

He finally dropped his debut project, High Tension after much anticipation. The Extended Playlist (EP) consisted of 7 tracks including Ginger Me, Vision 2020 singles.

Due to his fame and talent, he appeared as a guest artist on Olamide’s album Carpie Diem and Davido’s A Better Time.

In 2021, he served his loyal fans again with yet another hit singles Rush, World, Party Next Door (PND), and So Cold.

His sophomore project, High Tension 2.0 was released on July 7, 2021. Before he then released his second EP, an 8-track project composed of the following singles: Out There, Champion, World, Soldier Go, Far Away, Lako, Rush and Party Next Door.

Bella Shmurda’s dream became reality when he performed for the first time at The 02 Arena during Wizkid‘s concert held in November 2021.

Bella Shmurda is the founder of Dangbana Republik record label, an imprint for his songs.

Bella Shmurda is a talented Nigerian singer and songwriter. His net worth is an estimated $1 million.

The singer is rumoured to be in a relationship, although he has not denied or said anything about the claims. Instead, Bella is placing his priority on creating good music for the fans.