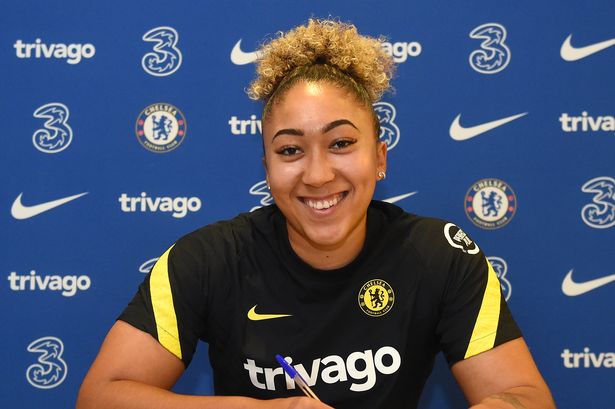 Lauren James (born 29 September 2001) is an English footballer who plays as a forward for FA Women Soccer League (WSL) club, Chelsea. She is a sister to the famous Chelsea FC Senior team defender, Reece James.

Her football journey was not that easy, but her parents’ support made it possible to achieve her dream. She followed in her brother’s (James’) footsteps, which began playing football before he was even ten years old.

Lauren returned to Chelsea in 2021, the club that she began her football career after leaving to join Arsenal where she played for a season before joining Manchester United to play for three seasons between 2018 – 2021.

She has recognized her father Nigel, a UEFA licensed football coach, as inspiration and instrumental to her successful career in football. According to Lauren, “He has helped me in every step of the way. I grew up playing football with my brothers and wanted to play like them; I have always loved the game. I am grateful to my Dad for all the time, effort and love that he has put into my football by coaching me in order that I reach the very best level.

Lauren James grew up playing football with her brothers all coached and guided on the right path by their father, a licensed UEFA coach.. James was scouted by Arsenal a very teenage age of 13 and trained with the boys’ team, but within two years she began training with the first team.

She began her youth career with the club Chelsea in 2010 before being scouted by Arsenal. On 29 September 2017, Lauren James made her debut for Arsenal, coming on in the 67th minute to replace Lisa Evans in a 2–0 win over Everton in the 2017–18 season. In doing so, she became the second-youngest player in Arsenal’s history to make their debut.

In 2018, she transferred to Manchester United and played with the club till 2021. She made her competitive debut for Manchester United in a 1–0 League Cup victory against Liverpool, on 19 August. As the football season started that year, she registered an impressive start to the new season by scoring the opening two goals in United’s first game of the 2018–19 Championship season, which they had a 12–0 win away to Aston Villa.

Lauren James was voted FA Women’s Championship player of the month for September following her three goals across Manchester United’s unbeaten opening month. On 20 April 2019, James showed that she was equal to the task in front of the net as she scored four goals in a 7–0 league win against Crystal Palace

At the end of the 2019–20 season, James finished as United’s top scorer and was named to the four player shortlist for PFA Women’s Young Player of the Year. On 23 July 2021, James signed a four-year contract with Chelsea, a club she has always endeared.

In April 2017, James made her under-17 debut for England in a 2–0 friendly defeat to USA. On 14 October 2017, she captained England during a 10–0 win over Latvia as part of 2018 UEFA Women’s Under-17 Championship qualification, scoring four goals.

Due to her sterling performances in the U – 17 squad, she received her first call-up to the under-19 squad in January 2019 for the Algarve Tournament. In July 2019, James was named in the England squad for the 2019 UEFA Under-19 Championship in Scotland.

Lauren James is a professional English footballer with a net worth of $5 million.

Her father, Nigel James, has admitted that he feels proud of his children. He is happy to see both his children fulfill their dreams.