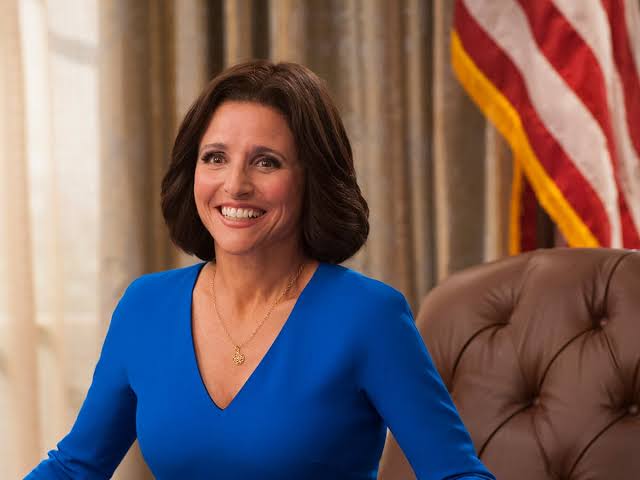 Julia Scarlett Elizabeth Louis-Dreyfus, born January 13, 1961, professionally known as Julia Louis Dreyfus, is a popular American actress, comedian, and producer. She shares the record for receiving the most Primetime Emmy Awards and Screen Actors Guild Awards with Cloris Leachman (eight), making her one of the most decorated actresses in American television history.

Jennifer Scarlett On January 13, 1961, Elizabeth Louis-Dreyfus was born in New York City. Her father, Gérard Louis-Dreyfus, was the chairman of the Louis Dreyfus Company, and her mother, Judith (née LeFever), was a writer and special needs tutor.

Her paternal grandfather, Pierre Louis-Dreyfus, was in the cavalry and participated in the French Resistance during World War II.

He was president of the Louis Dreyfus Group and a descendant of a Jewish family from Alsace.

She is also distantly related to Alfred Dreyfus of the infamous Dreyfus incident and the great-great-granddaughter of Léopold Louis-Dreyfus, who created the Louis Dreyfus Group, a French commodities and shipping company that her family still controls, in 1851.

Her parents separated in 1962, a year after Louis-Dreyfus was born. When Julia was four years old, her mother married L. Thompson Bowles, the dean of the George Washington University Medical School, and they relocated to Washington, D.C.

Lauren Bowles, another actress, became half-sister to Louis-Dreyfus. Louis-Dreyfus spent her early years in a number of states and nations due to her stepfather’s work with Project HOPE, including Tunisia, Colombia, and Sri Lanka.

She earned her diploma from Bethesda, Maryland’s Holton-Arms School in 1979.

Later, she added, “There were things I did in school that I wouldn’t have been as motivated to do if there had been boys in the room. For instance, I served as the honor society’s president.”

Louis-Dreyfus was a member of the Delta Gamma sorority while attending Northwestern University in Evanston, Illinois.

Before quitting her studies in theatre and the Mee-Ow Show, a student-run improv and sketch comedy revue, during her junior year, she accepted a position at Saturday Night Live.

Northwestern University awarded her an honorary doctor of arts degree in 2007.

Louis-Dreyfus made her comedic debut in Chicago, Illinois, with The Practical Theatre Company, and from 1982 to 1985, she appeared on Saturday Night Live as a sketch performer.

Her big break came in 1990 when she began a nine-season stint as Elaine Benes on Seinfeld, one of the most beloved and lucrative sitcoms ever.

Her other television appearances include Selina Meyer in Veep, which aired seven seasons on HBO, and Christine Campbell in The New Adventures of Old Christine, which ran for five seasons on CBS.

She started playing Valentina Allegra de Fontaine in 2021’s The Falcon and the Winter Soldier, Black Widow, and she’ll be reprising it in Thunderbolts in 2024.

Eight of Louis-Dreyfus’ eleven Emmy Awards were for acting, while three were for producing. Golden Globe, nine Screen Actors Guild, five American Comedy, and two Critics’ Choice Television Awards are among the several honors she has garnered.

In 2014, Louis-Dreyfus was admitted to the Television Academy Hall of Fame after receiving a star on the Hollywood Walk of Fame in 2010.

In the artists category of the annual Time 100 list, Louis-Dreyfus was named one of the 100 most influential people in the world in 2016.

In 2018, she was awarded the Mark Twain Prize for American Humor, the Kennedy Center’s highest comedy honor.

Julia Louis Dreyfus is a popular American actress, comedian, and producer with a net worth of $250 million.

Lauren Bowles, Louis-Dreyfus’ maternal half-sister, is a professional actress. Additionally, she shares two half-siblings from her father’s side, Phoebe and Emma, who passed away in August 2018.

One of her cousins, Robert Louis-Dreyfus, was the former CEO of Adidas and the proprietor of the soccer team Olympique de Marseille.

Louis-Dreyfus met her husband, the Saturday Night Live comic Brad Hall, while she was a student at Northwestern.

They tied the knot in 1987 and are parents to two sons.

A singer-songwriter who has been on The Tonight Show is her older son. Louis-Dreyfus received an honorary Doctor of Arts degree from Northwestern in 2007 after being invited back.