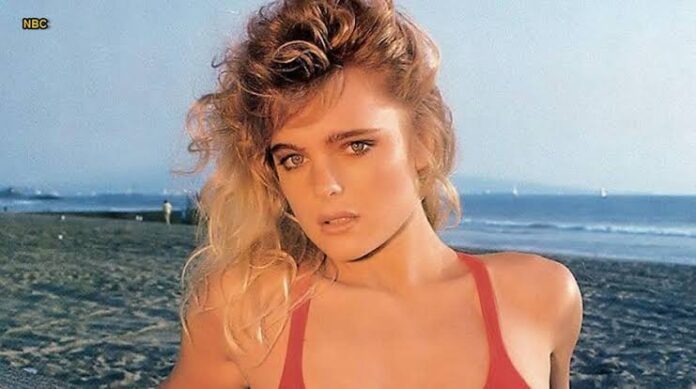 Erika Eleniak, born September 29, 1969, is a famous American actress, Playboy Playmate, and former model. She is well known for playing Shauni McClain in Baywatch. Her little role in E.T.: The Extra-Terrestrial served as her acting debut (1982). She went on to star in The Blob (1988), Under Siege (1992), and The Beverly Hillbillies, among other movies (1993).

Erika Eleniak was born in Glendale, California. Her mother, Iris Maya (Neggo) Arnold, is of German and Estonian ancestry, and her father, Dale Alan Eleniak, is of Ukrainian ancestry.

Wasyl Eleniak, Eleniak’s paternal great-grandfather, was one of the original pioneer Ukrainian immigrants to Canada.

Eleniak played the girl Elliott kissed in the classroom scene in the 1982 film E.T. the Extra-Terrestrial at the age of 12.

Henry Thomas, her 10-year-old co-star, admitted to People magazine that he found the sequence difficult to shoot: “When I had to kiss the girl, I had to do it twice! I’m not a fan of girls.

She starred in the 1988 horror movie The Blob, a remake of the 1958 film with the same name, as Vicki De Soto, a creature victim.

Eleniak made an appearance in a nautical-themed pictorial in the July 1989 issue of Playboy.

She won a part on Baywatch as female lead Shauni McClain, which she portrayed from 1989 to 1992, and also started a recurring role as Charles’s girlfriend Stephanie Curtis in the television series Charles in Charge the same year.

She also appeared in “One Last Kiss,” a Full House episode that aired on November 16, 1990, as Carrie, Jesse’s high school girlfriend (played by John Stamos).

In the 1992 movie Under Siege, Eleniak made a comeback as an actor, taking on the role of a Playboy Playmate who was hired to perform a striptease for the captain of a U.S. Navy battleship.

She is referred to in the movie as “Miss July 1989,” which corresponds to the actual month that Eleniak was Playmate of the Month.

Eleniak has struggled with her weight. She had an eating disorder at one point, and she was briefly hospitalized for abusing laxatives.

She took part in the fourth season of VH1’s Celebrity Fit Club in 2006 despite being overweight.

She appeared on the British comedy podcast 80’s Movie and Music Fest Cafe in 2006, where she spoke about her career with the hosts Ross Dyer and Julian Bayes.

She provided a humorous account of Baywatch and her challenge while Celebrity Fit Club was being filmed.

Erika Eleniak is a famous American actress, Playboy Playmate, and former model with a net worth of around $4 million.

Eleniak wed bodybuilder Philip Goglia on May 22, 1998, however the union crumbled after only six months.

Eleniak fell in love with Calgary after shooting Snowbound there in 2001. She started dating a key grip who worked on the set named Roch Daigle.

She had intended to move away from Los Angeles because she found it challenging to commute to and from Telluride, Colorado. Daigle lived in Calgary, where she bought a house.

They eventually got married and Eleniak got pregnant in 2005, but the pregnancy was found to be ectopic six and a half weeks into her term, necessitating emergency surgery, which resulted in a miscarriage.

Later on, Eleniak got pregnant once more and gave birth to a daughter.