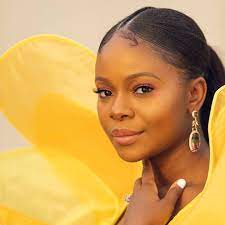 Zainab Balogun-Nwachukwu is a Nigerian actress, model, and television presenter. Zainab was born on 10th October 1989 in South West London to Nigerian parents, with roots being traced to Abeokuta, Ogun State, Nigeria.

Zainab Balogun is an eloquent TV host and co-founder of The J-ist TV, an online entertainment web series that highlights African culture and a range of topical issues. This graduate of law currently co-hosts and produces The Spot, a leading talk show on Ebony Life TV with Lamide Akintobi and Ebuka Obi-Uchendu

The award-winning Nollywood actress can be remembered for the role she played as an event planner in one of Nigeria’s highest grossing movies, The Wedding Party.

Balogun was born in London to Nigerian parents, where she was raised with a large extended family, predominantly in Clapham, a district of South West London.

She had her secondary school education at Sacred Heart RC Secondary School. She developed interest in the arts as she regularly took part in talent shows and school plays.

She studied music and eventually went on to join the school choir and later formed an R&B girl group with two friends called Regné.

She completed her A Levels in Law, Psychology, and English Language & Literature at Christ the King Sixth Form College and went on to further her studies in University of Kent in Medway where she received a Bachelor of Law degree (LLB).

The law graduate-turned TV host, Zainab Balogun, started her modeling career after being scouted by Premier Models Management at the age of 16. After obtaining her law degree, she began to appear in shows such as BBC One’s Material Girl, the Bollywood movie Cocktail in 2012, and The Charlatans by Ashley Waters.

She then established herself on set with legendary director Christopher Nolan in 2011 for the film, The Dark Knight Rises, which she describes as an unforgettable experience.

Balogun is now a television presenter, who produces and hosts shows for EbonyLife TV, an entertainment television network.  She has also produced shows such as EL Now, a daily entertainment news show for the latest in fashion, music, and the arts.

Currently, she is one of the hosts on The Spot, a daily hang-out talk show which is co-hosted by Ebuka Obi-Uchendu and Lamide Akintobi. Zainab has shown herself as one of the promising stars in the movie industry that will stand the test of time. This is evident in the films that she has been involved in, which include

Zainab Balogun tied the marriage knot traditionally with Dikko Nwachukwu, founder of Jetwest Airways, on May 13th May, 2018 in Lagos, Nigeria.

In March, 2022, the delectable actress opened up about her battle with endometriosis, a disorder where tissue appears outside a woman’s uterus. In an Instagram post, the actress noted that the disorder has caused her vicious pain for more than 20 years. She revealed that she began to lose her hair as a result of treatment.

Zainab’s husband, Dikko is a widower who already had 2 sons: Ethan and Eli, who have now become Zainab’s children since their marriage in 2018.