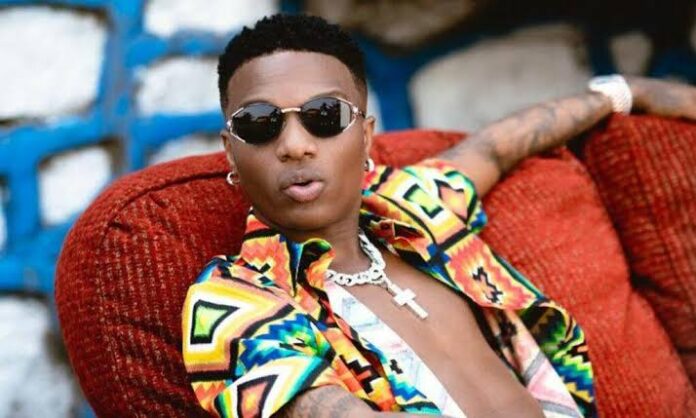 Ayodeji Ibrahim Balogun, born July 16, 1990, professionally known as Wizkid, is a Nigerian singer and songwriter. At the age of 11, he started recording music and released a collaborative album with the Glorious Five (5), a group he formed with his friends in church.

He was raised in a mixed-religion family with twelve female siblings. His father follows Islam, but his mother is a Pentecostal Christian.

Wizkid’s father has three wives including his mother living together in the same house with his siblings.

With a couple of his church pals, Wizkid formed the Glorious Five. They succeeded in putting out an album before breaking up.

Lil Prinz was Wizkid’s stage name then until 2006 when he changed. He eventually met with record producer OJB Jezreel, who forbade him from recording for a year.

He frequently went to OJB’s Point Beat Studios where he saw 2Face Idibia work on the tracks for his Grass 2 Grace album.

He also attended the recording sessions for Sound Sultan’s self-titled debut album. Wizkid cited Naeto C as his coach and mentor when he was 15 years old.

Empire Mates Entertainment and Wizkid signed a record deal in 2009. “Omoge You Too Much,” a song from Banky W’s The W Experience album, was co-written by Wizkid.

Along the way, he collaborated with Naeto C, Ikechukwu, and M.I. Midway through 2009, he left Lagos State University (LASU). Later, he enrolled in Lead City University but left after just two sessions.

In 2009, Banky W’s Empire Mates Entertainment (E.M.E) and Wizkid agreed to a record deal and he released his debut project, Superstar with singles such as Don’t Dull, Holla at Your Boy which brought him to stardom.

His second studio album, Ayo, which he self-titled, was released in September 2014. Six singles were released in support of the album, one of which was “Jaiye Jaiye.”

After his contract with E.M.E expired, Wizkid departed. Following his collaboration with Drake on the hit song “One Dance,” which topped the charts in 14 more nations in addition to the US Billboard Hot 100, Wizkid gained popularity on a global scale in 2016.

Wizkid became the first Afrobeats artist to be listed in the Guinness World Records after the song smashed numerous records.

He signed a multi-album deal with RCA Records in March 2017, and later that year, his third studio album, Sounds from the Other Side, was published.

Five singles were released to promote the album, one of which was “Come Closer” with Drake.

Wizkid is a popular Nigerian singer and songwriter with a net worth of $4 million.

Wizkid is not yet married although he has three sons with three different ladies. Wizkid three sons Zion Ayo-Balogun, Boluwatife Balogun and Ayodeji Ibrahim Balogun Jr. where born in 2011, 2016, and 2017.

Wizkid claimed in a February 2015 interview with Alex Frank of Vogue magazine that he mixes street attire and traditional Nigerian clothing.

One of his fashion style icons, according to him, is Pharrell Williams. He also disclosed plans to launch a clothing brand.