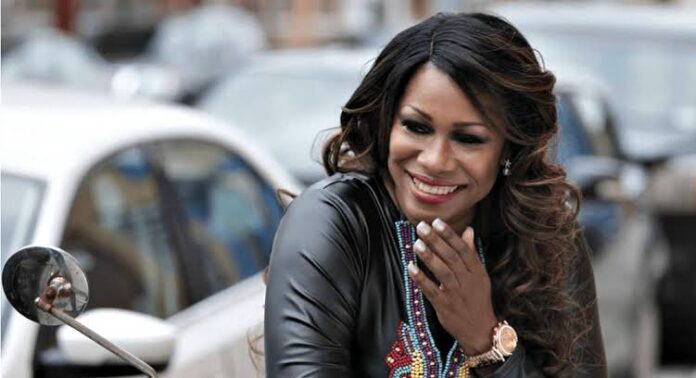 She furthered her education to University of Lagos (UNILAG), where she earned a bachelor’s degree in biological sciences (B.Sc. Biology) in 1990.

In 1988, she won the Miss University of Lagos title while studying in the institution.

Regina Askia participated in the MBGN 1988 competition. Despite being the favorite to win, she came in second.

When the winner Bianca Onoh stepped down the following year, she took over as the titleholder.

During the Miss Charm International in Leningrad, Russia, in 1990, Regina Askia-Williams represented Nigeria there and placed second.

She also made history by becoming the first Nigerian to compete in the Miss International pageant in Japan, where she stood out for wearing the best traditional attire.

Regina Askia-Williams launched a modeling career after winning a beauty pageant and became well-known in Nigeria.

As a model, Askia-Williams was featured in a number of Nigerian print and television advertisements, including those for the fast food chain Chicken George, the hair care line Kessingsheen, the retailer Collectibles, and most notably Visine.

Regina Askia made her acting debut playing the character of gold-digger Tokunbo Johnson in the Nigerian soap Fortunes, on the NTA Network in 1993.

She has won numerous honors for her performances, including one given by Afro Hollywood London in 2000 for “Best Actress in Nigeria.”

She has also produced a number of television programs and movies.

Throughout the 1990s and the beginning of the 2000s, Regina Askia-Williams appeared in a number of “Nollywood” movies, the majority of which were made with the intention of being released exclusively on video.

For her fame, Regina Askia-Williams was compared to Elizabeth Taylor.

The net worth of Regina Askia is an estimated $1.7 million.

Regina Askia-Williams is married to Rudolph “Rudy” Williams, an American who is the grandson of Fess Williams and the nephew of Ron Everette.

The couple has two children: Teesa Olympia and Rudolph Junior. She has a daughter, Stephanie Hornecker, a model in her previous marriage.

She and her family currently reside in America, and she works as a family nurse practitioner in New York City.

Regina Askia-Williams made it through the September 11, 2001, attack on the World Trade Center.

Only three months after moving to New York City with her family, she made her way out of the building where she was working at the time.

At a gala event in Washington, D.C. in 2007, Askia-Williams was one of several African women who received an award from the Celebrating African Motherhood Organization (CAM).