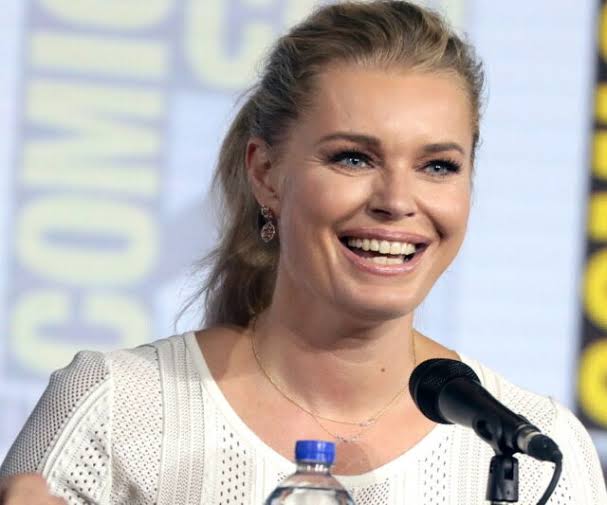 Rebecca Alie O’Connel, born November 6, 1972, known professionally as Rebecca Romijn, is a talented American actress and former model. She is best known for portraying Mystique in the first three X-Men movies (2000–2006), Joan in The Punisher (2004), and the twin roles of Laure Ash and Lily Watts in Femme Fatale (2002).

California’s Berkeley is where Rebecca Romijn was born. Elizabeth Romijn (formerly Kuizenga), her mother, is a textbook author and English as a Second Language (ESL) instructor at a community college.

Jaap Romijn, Rebecca’s father, creates unique pieces of furniture. Her mother is an American with Dutch and English descent, while her father is a native of Barneveld, the Netherlands.

As a young woman participating in a student exchange program, her mother moved to the Netherlands where she met Rebecca’s father.

Henry Bernard Kuizenga, the maternal grandfather of Romijn, was a Presbyterian clergyman and seminary instructor.

When asked on The Ellen DeGeneres Show why she always seemed to be gorgeous and attractive, Romijn admitted that she was a shy “drama geek” in her early teens and that her growth spurt had caused her to develop scoliosis, which left her in excruciating pain.

Many sources claim that she was formerly known as the “Jolly Blonde Giant” due to her height of 5 feet 11 inches (1.80 m), although she has acknowledged that she made that up “for laughs.”

She began modeling while pursuing her studies in music (voice) at the University of California, Santa Cruz and later traveled to Paris, where she spent more than three years.

In 1991, Romijn began working as a model, among other things.

Elle, Marie Claire, and the American, Italian, Spanish, German, Portuguese, Russian, Russian, Greek, and Mexican editions of Cosmopolitan, Allure, Glamour, GQ, Esquire, and Sports Illustrated have all featured her on their covers.

In the “Chinatown” episode of the animated chat program Space Ghost Coast to Coast, she made an appearance as a guest.

In The Librarians, a direct sequel to the The Librarian movie series, she starred as Eve Baird, the protector of the titular group. She also anchored the reality program Skin Wars on GSN.

She performed in the role of Lois Lane again in Justice League Dark: Apokolips War after voicing the character in the DC Universe Animated Original Movie, which was an adaption of The Death of Superman, in 2018.

In the second season of Star Trek: Discovery in 2019, she made frequent appearances as Number One, the USS Enterprise’s first officer.

In the 2022 release of the spin-off series Star Trek: Strange New Worlds, she reprised the part.

The Real Love Boat, which will premiere on CBS on October 5, 2022, will be hosted by her and her husband O’Connell.

Rebecca Romijn is a famous American actress and former model with an estimated net of $20 million.

In 1994, when Romijn was modeling for Victoria’s Secret, she met actor John Stamos there. The two soon started dating.

They got married on September 19, 1998 at the Beverly Hills Hotel after being engaged on Christmas Eve, 1997.

She went by Rebecca Romijn-Stamos during the marriage, both personally and professionally. In April 2004, they made their breakup public.

Stamos started the divorce process in August 2004; it was officially finalized on March 1st, 2005.

After a Conan crew member saw “Romijn-Stamos” on her driver’s license, Romijn resumed using her maiden name, but she admitted in an August 2013 interview that she had never legally changed her name back from Romijn-Stamos.