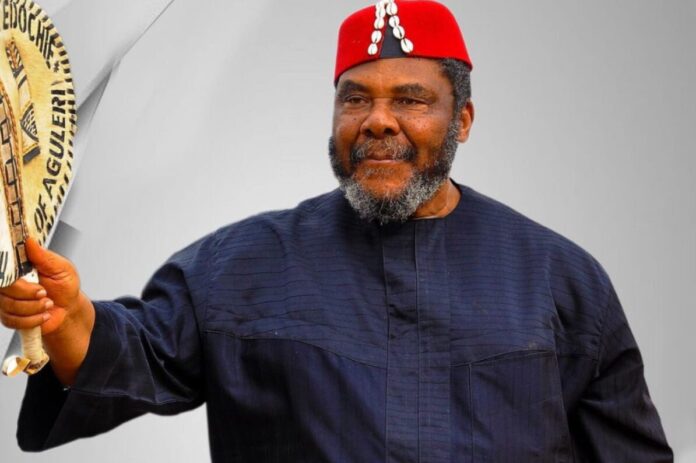 Chief Pete Edochie, MON, born March 7, 1947, is a veteran and influential Nigerian actor. He was born in Zaria and hails from Nteje in Oyi Local Government Area, Anambra State, Nigeria. Edochie is regarded as one of Africa’s most talented actors, having received the Africa Magic Industry Merit Award.

Pete Edochie was born in Zaria, Kaduna State, Nigeria. He turned 70 in 2017, and after having lived “three scores and ten” years, he stated he still feels strong.

He attended St. Patrick’s and St. James Primary School in Zaria for his primary education. After that, he went to St. John’s College for his secondary education.

Pete Edochie studied at the School of Journalism and Television in England, as well as taking various courses abroad.

Edochie worked for the Nigerian Railway Corporation after secondary school and before traveling to England to study. After that, in 1967, he went into radio.

Edochie began his career in radio broadcasting as a junior programming assistant at the age of 20, later rising to the position of Director.

He left ABS as the government tried to politicize the activities of their FM station, forcing the entire management team, including him, to resign.

He was supposed to be the MD’s immediate successor, but he had to quit to pursue a career in the film industry.

He had previously appeared in Things Fall Apart and earned an International Award.

For his participation in Things Fall Apart, the BBC travelled into Nigeria to interview him. He has a total of 18 films to his credit.

Edochie praised the Wikimedia movement in Nigeria by appearing in a film to raise knowledge and use of Wikipedia among older generations in September 2017.

Pete Edochie starred in the film “Fatal Arrogance” in 2020, which was met with a lot of backlash.

The Islamic Movement in Nigeria, better known as Shiites, has attacked the legendary Nollywood actor over his role in a new film, claiming that the film tries to portray the union as a terrorist organization.

However, the actor stated that he is not responsible for any troubles that the film may cause, instead holding the film’s producers accountable.

Pete Edochie has an estimated net worth of $4 million. The actor is one of the founding members of Nollywood, having starred in several films.

Pete Edochie has appeared in several Nollywood movies and television series. Below are some of his movies:

Pete married Josephine Edochie when he was 22 years old, and the couple had six children: five boys and one girl. Linc Edochie and Yul Edochie, two of his children, are well-known in the industry as professional actors.