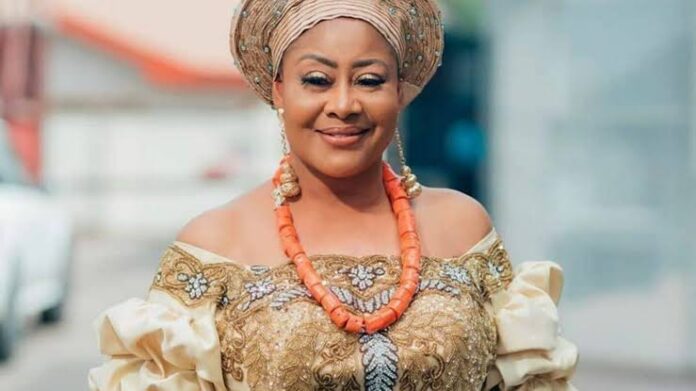 Ngozi Ikpelue, born May 23, 1965, better known as Ngozi Ezeonu, is a Nigerian actress and former journalist. She is best known for her maternal roles in Nollywood films. Ngozi Ezeonu was born in Owerri, Imo State where she hails from.

Ngozi Ezeonu is an Ogbunike native. She was born into the family of Dennis and Ezenwanyi Ikpelue in Owerri where she grew up with her six siblings.

She worked for Radio Lagos and Eko FM before becoming well-known as an actress.

She studied journalism at the Nigerian Institute of Journalism.

Ngozi Ezeonu was first cast as a young character at the beginning of her acting career, despite the fact that she is best known for playing mothers role.

Ezeonu received a supporting role as Nkechi, the antagonist’s best friend, in the Igbo hit film, Nneka The Pretty Serpent in 1993 from seasoned filmmaker Zeb Ejiro.

She then played Thelma, a high society mistress, in the 1994 film Glamour Girls, which gave her massive fame in the Nigerian movie industry.

The iconic actress has featured in more than 150 films since she had her breakthrough into Nollywood.

The net worth of Ngozi Ezeonu is an estimated $1 million.

Ngozi Ezeonu was married to Edwin Ezeonu, with the union blessed with children. However the marriage ended in 2015 after the couple divorce at the Ikeja high court.