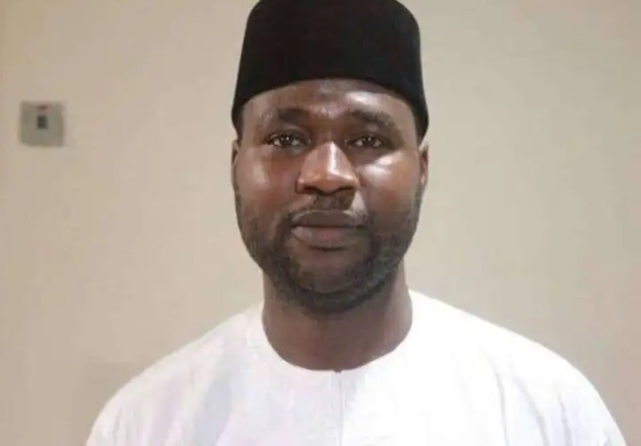 Mubarak Bala is a Nigerian atheist and president of the Humanist Association of Nigeria. He has faced persecution and arrest for leaving Islam and publicly expressing atheist views.

On Tuesday, April 5, 2022, the Kano State High Court sentenced Mubarak to 24 years imprisonment for blasphemy, after pleading guilty to an 18-count charge of blasphemy and public incitement.

Mubarak Bala was born in Kano State, the northern geopolitical zone of Nigeria, in the mid-80s. He was forcibly committed to a psychiatric institution in Kano for 18 days in 2014, where he was forcibly drugged.

The International Humanist and Ethical Union has taken up Mubarak Bala’s case and feels his human rights were violated. According to the IHEU, “The real reason for this outrageous and inhumane action is because Mubarak has renounced Islam and has openly declared himself to be an atheist.”

On July 4, 2014, the BBC reported that Bala had been released from hospital in conjunction with a doctors’ strike, and was seeking reconciliation with his family. It was not yet clear if he would remain in Northern Nigeria, due to death threats.

Mubarak Bala decided to stay in Nigeria and was named president of an organization called the Nigerian Humanists, and in April 2020, he was arrested in Kaduna for blasphemy due to a Facebook post he made, and has been held without charge since then.

The Nigerian police allegedly transferred him from Kaduna to Kano, where Shariah law is practiced, and in the face of several credible death threats, fears are mounting for his safety.

Human rights activist, Leo Igwe has been working hard to fight for his rights, working with several atheist and humanist organizations, notably Humanism International and Atheist Alliance International. This has a long and honorable history of campaigning going back to its registration as a charity in 1991, has UN consultative status, Council of Europe participatory status, and is gold-rated for transparency by Guide Star.

Also, the newly formed International Association of Atheists (IAA) has also joined forces to raise awareness and funds to help pay Mubarak’s legal costs, although it must be said that the international media has been mostly silent on this case. Recently, the United States Commission on International Religious Freedom (USCIRF) took an interest in Mubarak and has started applying pressure on the Nigerian government.

The net worth of Mubarak Bala is estimated to be around $1 million.

On April 5, 2022, Mubarak was sentenced to 24 years in prison at a high court in the Northern state of Kano; he pleaded guilty to all 24 charges and asked for leniency.

Mubarak Bala is married to Amina Ahmed and with the marriage blessed with a child. They got married in 2020 in a traditional marriage.