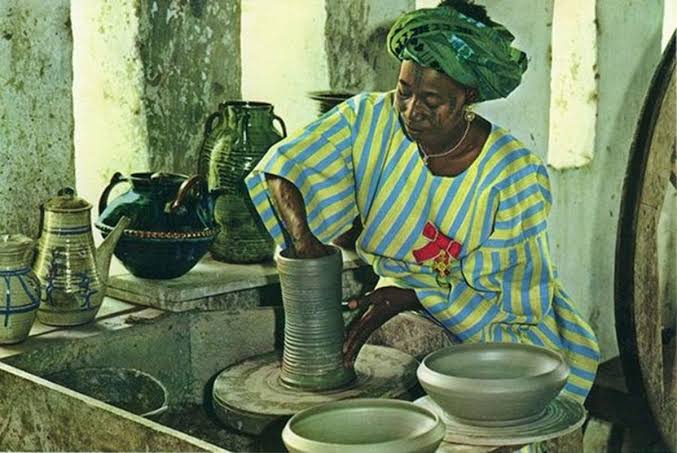 Here is the biography of Ladi Kwali, the famous Nigerian potter and ceramicist celebrated around the world.

She was celebrated by Google for her achievement during her time of existence.

She was born in Kwali village in the Gwari region of Northern Nigeria, where pottery was an indigenous occupation among women.

Ladi Kwali learned to make pottery as a child by her aunt using the traditional method of coiling.

Ladi Kwali was born in the small village of Kwali, present Kwali Area Council of the Federal Capital Territory, in 1925.

She grew up in a family that kept up with the folkloric female tradition of pottery making.

According to Mallam Mekaniki Kyebese, Ladi Kwali’s younger brother, “even in the early years of pottery making, Ladi Kwali excelled in the crafts and her wares were often sold even before they were taken to the markets”.

She was moved by the traditional cultural environment to produce pottery pieces that were influenced by the Gbagyi tradition and accentuated with personal idioms during the first professional years.

Kwali’s approach to clay was inspired by mathematical undertones, made visible by the continuous display of symmetry.

Ladi Kwali learned to make pottery as a child by her aunt using the traditional method of coiling.

She was able to make large pots for use as water jars, cooking pots, bowls, and flasks from coils of clay, beaten from the inside with a flat wooden paddle.

The designs were decorated with incised geometric and stylized figurative patterns, including scorpions, lizards, crocodiles, chameleons, snakes, birds, and fish.

Ladi Kwali’s pots were noted for their beauty of form and decoration, which earned her recognition regionally as a gifted and eminent potter.

Some of her designs were acquired by the Emir of Abuja, Alhaji Suleiman Barau, in whose home they were seen by Michael Cardew in 1950.

From her cultural tradition, where females were primarily responsible for pottery, Ladi Kwali’s ceramics became “art objects” and famous.

Her pots were featured in international exhibitions of Abuja pottery in 1958, 1959, and 1962, organised by Cardew.

In 1972, she toured America with Cardew. Her work was shown to great acclaim in London at the Berkeley Galleries. The Abuja Pottery was renamed the Ladi Kwali Pottery in the early 1980s.

She won several awards during her time of making pottery.

Not much information is known about her personal life, although she is a celebrated woman.

In March 2022, Google celebrated her with their doddle in recognition of her massive achievements.