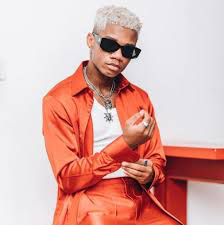 Dennis Nana Dwamena, born August 18, 1993, popularly known as KiDi, is a Ghanaian high-life and afrobeats singer-songwriter producer. He is signed to Lynx Entertainment , MadeInENY, and Empire and is best known for his hit single “Odo remix” featuring Nigerian superstars Mayorkun and Davido, which has received massive airplay across Africa.

KiDi was born Dennis Nana Dwamena on August 18, 1993, in Accra, Ghana to Gerald and Beatrice Thompson.

He then went on to the University of Ghana Legon, where he graduated in 2016 with a degree in Economics and Information Studies.

While studying Economics and Information Studies at the University of Ghana.

KiDi’s love for music led him to perform on various “Moonlight Café” platforms – a production that supports underground artistes and gives them a platform to display their talents.

He also recorded covers of popular songs. In 2015, KiDi took a leap of faith by joining the MTN Hitmaker competition.

He went on to win the competition and was later signed to Lynx Entertainment. KiDi shot to prominence in 2017 when he released “Say You Love Me” a song he not only composed but also arranged and produced.

KiDi established himself as one of the fastest rising stars in Ghana when he released yet another chart-topper titled “Ɔdɔ” (meaning-Love) in July 2017, the remix with Nigerian artist Davido and Mayorkun in December 2017, and Adiepena in April 2018.

He followed this with several hit songs including the 2020 smash hit ‘Say Cheese’ which debuted on the UK’s Official Afrobeats Chart. KiDi was also featured on Wyclef Jean’s show ‘Run That Back’ in 2020.

Details about the private life of KiDi, the Ghanaian high-life, afrobeat singer-songwriter is one of the most highly sought-after pieces of information about the superstar.

The interest in his personal life increased since he disclosed that he has a son whom he is very fond of.

It was surprising that someone of KiDi’s status who is always under the spotlight could keep details about his son private.