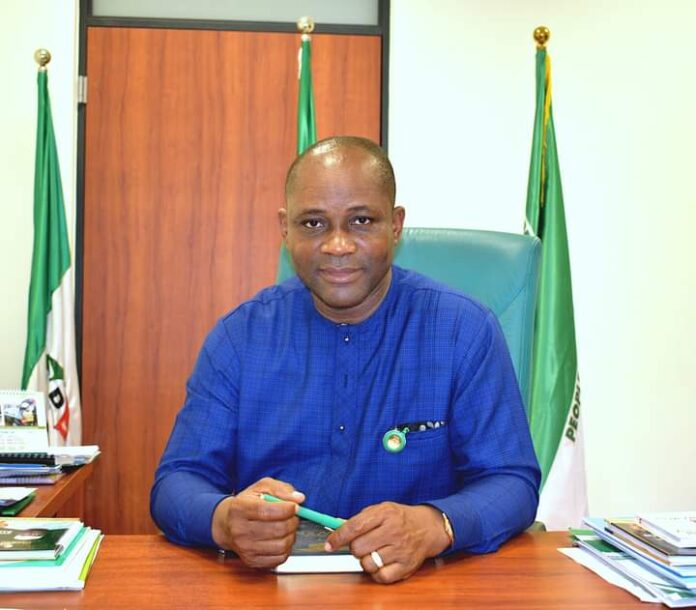 Francis Uduyok has been an outstanding representative of his people, having served in key political positions.

He has been a staunch politician who witnessed a gradual elevation from the very infantry level of Students’ Unionism as the worldwide president of all Eastern Obolo students, Special Assistant to a former state lawmaker, two-term Local Government Chairman and now Member of the National Assembly in the House of Representatives, Abuja.

He began his education at the prestigious St. Silas (Ang) Primary School, Okoroete, where he obtained his First School Leaving Certificate (FSLC).

The prolific politician proceeded to Commercial Secondary School, Ibekwe, for his secondary education and obtained his Senior School Certificate in 1996.

Hon. Uduyok gained admission into the University of Calabar where he graduated with a Bachelor’s degree in Accounting & Finance in 2000.

The popular lawmaker has also served as a member of the Federal Board of the Nigerian Stored Products Research Institute.

He contested in the 2007 chairmanship elections and was elected as the Executive Chairman of Eastern Obolo Local Government Area of Akwa Ibom State. Due to the massive progress during his administration he was elected for a second tenure which lasted until 2015.

During his tenure in office as the Chairman of the Eastern Obolo Local Government Council, his interventionist projects made Eastern Obolo a reference point and a model in local government administration not only in Akwa Ibom State but in Nigeria.

Some of the projects initiated and completed during his administration include building secretariat blocks; admin blocks; finance/Treasury blocks; ultra-modern legislative blocks; and the construction of roads in Okoroete, the Local Government headquarters.

After an excellent performance in the local government level, Hon. Uduyok was elected as a member representing Ikot Abasi/Mkpat Enin/Eastern Obolo Federal Constituency of Akwa Ibom State, under the platform of the People’s Democratic Party (PDP) in a free and fair election with the people making their choice.

He was re-elected for a second tenure until 2023 after the people witnessed his utmost and excellent representation.

In the National Assembly, he has sponsored several motions, including the ALSCON reactivation, a motion compelling the House members to honour and show solidarity to the victims of the Reigners Bible Church Collapse, and a motion on the creation of additional state constituencies in Akwa Ibom state and Nigeria in accordance with our constitution.

He has spearheaded many projects in his constituency, including:

On January 5, 2022, Hon. Francis Uduyok declared his ambition to contest for the Eket Senatorial District seat in the forthcoming 2023 general elections.

Hon. Francis is a popular Nigerian politician who has an estimated net worth of around $5 million.

Hon. Francis Uduyok is married to his beloved wife, Mrs. Idorenyin Francis Uduyok, popularly known as Mother Theresa, because of her philanthropic lifestyle and ability to carry everyone along. Their union is blessed with lovely children.