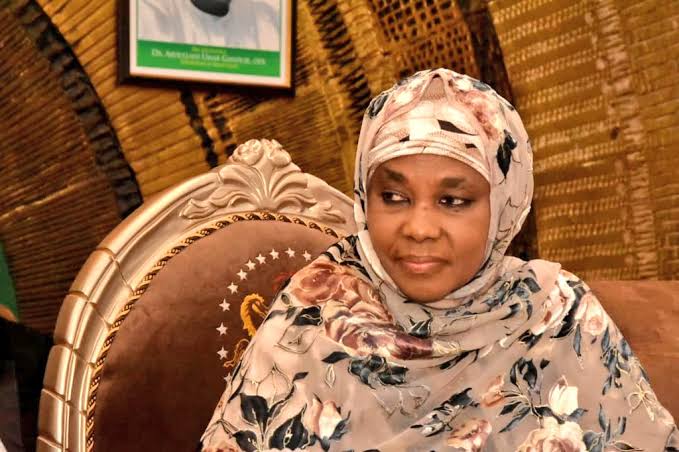 Hafsat Abdulahi Ganduje, born December 28, 1960, better known as Gwaggo, is a popular Nigerian politician and the First Lady of Kano State. She was born in Kano State where she hails from and had her early education. Hafsat Ganduje is a successful politician who is strongly backing his husband, Abdullahi Umar Ganduje.

Prior to becoming the First Lady of Kano State, she worked in Bayero University as a lecturer a the Faculty of Education.

In order to further her education, Hafsat Ganduje got admitted into Bayero University where she graduated with Bachelor of Science in Education

In 2015, she earned a Doctor of Philosophy in Administration and Planning in 2015.

Hafsat Ganduje began her career as a teacher, then gained promotion as a principal.

She lectured at the Faculty of Education of Bayero University and was promoted to Associate Professor in 2019 by the Maryniam Abacha American University of Niger.

She is a member of the Nigerian Institute of Management.

In 2019, Ganduje’s wife was given the Great Matron Award by the Nigerian Association for Administration and Planning.

Hafsat Ganduje is a popular Nigerian politician whose net worth is estimated to be around $5 million.

Hafsat Ganduje is married to Kano State Governor Abdullahi Umar Ganduje, which qualifies her as the First Lady of Kano State.

Hafsat Ganduje has been accused of corruption, according to EFCC report by her own son, Abdulazeez Ganduje, about Hafsat’s involvement in bribery and land fraud.

The EFCC invited her for interview in September 2021 but she declined and was later arrested in early October 2021, in Abuja.