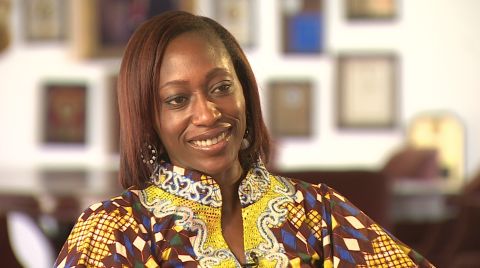 She was born in Lagos, and she is the daughter of Nigeria’s uninaugurated president-elect, the late Chief Moshood Abiola.

Hafsat Abiola is a councilor at the World Future Council among 49 other well-known personalities, a position she assumed in May 2008.

Hafsat Abiola is the eighth child of Nigeria’s uninaugurated president-elect, the late Chief Moshood Abiola, and the late Kudirat Abiola. She was born and raised in Lagos, alongside her siblings.

Hafsat Abiola’s father, Moshood Abiola, was jailed by the dictator Gen. Sani Abacha for treason after declaring himself president. He later died while in detention in 1998. Her mother was murdered during a demonstration for the release of her husband in 1996.

Hafsat Abiola-Costello attended Queens College, Yaba, Lagos. She graduated from Phillips Academy, Andover, in 1992 and Harvard College in 1996, where she earned a degree in development economics, and later earned her M.Sc. in international development from Tsinghua University, Beijing.

She also received an honorary doctorate from Haverford College to add to her educational portfolio.

In honor of her mother’s death, Hafsat Abiola founded Kudirat Initiative for Democracy (KIND) in 1997 with the aim of promoting the development of women as initiators of change through leadership and awareness programs, and she is currently the board president.

KIND is among the major organizations that demanded the reconsideration of the gender bill that was rejected by the National Assembly of Nigeria (NASS), a bill seeking the amendment of Section 26(2a) of the 1999 Nigerian Constitution; if passed, foreigners married to Nigerian women will be able to apply for Nigerian citizenship.

The bill is also pushing for at least 35% of political party and appointing positions at the federal and state levels to be filled by women and many other women-related issues, although it was rejected by the National Assembly.

In 2009, Hafsat Abiola-Costello founded China-Africa Bridge and China-Africa Forum, which promote mutually beneficial cross-cultural collaboration between China and Africa, with a specific eye on women’s contributions to the economy.

In 2006, she was able to raise funds by organizing performances of The Vagina Monologues in Nigeria. Since May 2008, she has also been a councilor at the World Future Council, among 49 other well-known personalities.

Hafsat Abiola-Costello is also an advisory council member at the Fetzer Institute as well as the Nuclear Age Peace Foundation.

In July 2011, she was appointed the Special Adviser to the Governor of Ogun State with responsibility for achieving the Millennium Development Goals.

The net worth of Hafsat Abiola is an estimated $1 million. She is a popular Nigerian activist and daughter of Nigeria’s uninaugurated president-elect, the late Chief Moshood Abiola.

Hafsat Abiola is married to Nicholas Costello, a British diplomat from the United Kingdom. They got married in 2001 and have two children together, Khalil and Anabella.

A documentary, “The Supreme Price,” details the story of Hafsat Abiola and how both her parents paid a terrible cost in their quest for a better, freer Nigeria.

The documentary was directed by Joanna Lipper, a lecturer at Harvard University, who tells the story from Hafsat’s perspective. The documentary also includes interviews with Walter Carrington, former U.S. ambassador to Nigeria, and Nobel Prize-winning writer Wole Soyinka.