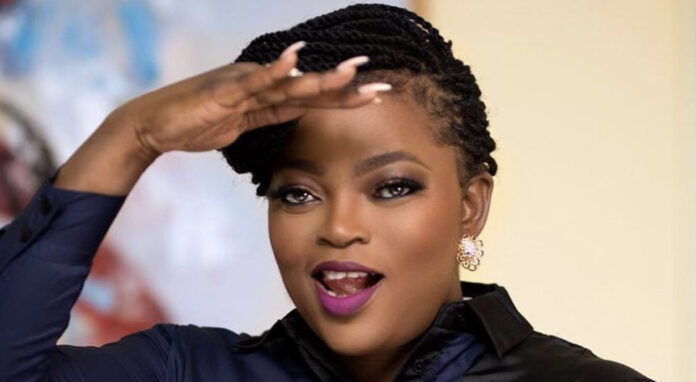 Akindele-Bello Olufunke Ayotunde, born August 24, 1977, better known as Funke Akindele or Jenifa, is a popular Nigerian actress, filmmaker, and brand influencer. She is widely known for her role as Jenifa in her series “Jenifa’s Diary.”

Funke Akindele was born in Ikorodu, Lagos State, Nigeria, where she hails from. She is the second child in a family of three children (two girls and one boy).

She starred in the sitcom I Need to Know from 1998 to 2002, and won the 2009 Africa Movie Academy Award for Best Actress in a Leading Role.

Funke Akindele originally hails from Ikorodu, Lagos State, Nigeria, where she was born and raised alongside her two siblings. The actress is the second child in a family of three children, two girls and a boy.

Funke Akindele’s father is a retired school principal, while her mother is a medical doctor, and they were both supportive of the actress in her ambition and plans to become an actress.

Jenifa, as she is fondly known, attended Grace Children School in Gbagada, Lagos State, after she acquired her first school leaving certificate in a public primary school in Lagos State, in the south-west region of Nigeria.

She went further to obtain an Ordinary National Diploma (OND) in Mass Communication from the former Ogun State Polytechnic, now known as Moshood Abiola Polytechnic, then proceeded to the prestigious University of Lagos, where she earned a law degree.

Funke Akindele began her acting while she was still in college, although she was not that popular until she joined Nollywood, which helped bring up her confidence in acting, and she played several vital roles in Nollywood movies.

She rose to prominence following the success of her series “Jenifa’s Diary,” in which she played the role of Jenifa, a local Yoruba girl. Her lead role in “Jenifa’s Diary” earned her the Best Actress in Comedy at the 2016 Africa Magic Viewers Choice Awards.

Akindele became a sought-after actress in the industry after starring in the popular United Nations Population Fund (UNFPA)-sponsored sitcom I Need to Know, which ran from 1998 to 2002. She played the role of Bisi, a curious but highly intelligent secondary school student.

In January 2018, there were rumors that Funke Akindele would make her Hollywood debut in Marvel’s movie, Avengers: Infinity War, after she was listed as a member of the cast on IMDb. She was set to star in “Infinity War” as one of the guards, Dora Milaje, of Wakanda.

However, her name was replaced with that of fellow Nollywood actress, Genevieve Nnaji, with Akindele’s upload shown to have been a hack. A few weeks later, Genevieve Nnaji’s name was also removed from the cast, and the two of them didn’t make the Avengers movie.

Akindele is widely known for her role as the lead character in the ongoing TV show Jenifa’s Diary, alongside Fisayo Ajisola, Falz, Juliana Olayode, and Aderounmu Adejumoke.

in July 2019, the Yoruba-born actress started a new web series, Aiyetoro Town, a spinoff from her popular TV series, Jenifa’s Diary. She is the founder and CEO of Scene One Film Production, a Nigerian movie production company.

As a filmmaker and director, Funke Akindele made her directorial debut in the 2019 political drama film, Your Excellency. Her movie Omo Ghetto set a new record when it became the highest-grossing Nigerian movie of all time, breaking the four-year record of Kemi Adetiba‘s movie titled “The Wedding Party.”

The net worth of Funke Akindele is an estimated $5 million. Jenifa is a top and legendary Nollywood actress, filmmaker, and brand influencer. She makes money through acting and several endorsement deals with reputable brands.

In November 2019, she also signed an endorsement deal with WAW Nigeria, a company that manufactures detergent and bar soap.

Funke Akindele got married to Adeola Kehinde Oloyede. They got married on May 26, 2012, although the marriage was not successful as the couple divorced in July 2013, due to irreconcilable differences.

She went on to marry Nigerian rapper JJC Skillz, in a glamorous wedding that took place in London in May 2016. She was rumored to be pregnant in August 2017, which sparked reactions on social media. In December 2018, she gave birth to twin boys.