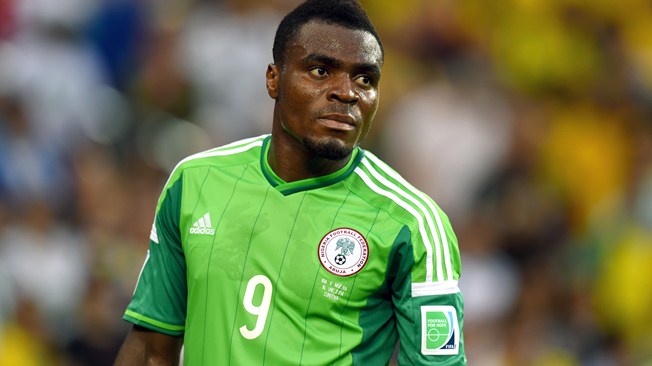 Emmanuel Chinenye Emenike, born May 10, 1987, professionally known as Emmanuel Emenike, is a Nigerian former footballer who played as a striker for several European clubs. He most recently played for Belgian club Westerlo before he retired due to health concerns.

He was born in Otuocha, Aguleri Anambra East Local Government Area of Anambra State, Nigeria where he was raised alongside his siblings under the care of his parents.

Emenike started his football career in grassroot football, playing for Delta Force. He didn’t get paid because he played for the club when it was non-professional and the team were in a low division.

Emmanuel Emenike hails from Otuocha, Aguleri Anambra East Local Government Area of Anambra State where he was born and raised.

He had both his primary and secondary education in Anambra State before he took his football ambition serious then joined a club in Nigeria.

Not much information is revealed about the player’s early life and education, although he grew up in Anambra State where he began to train with his neighborhood.

Emenike revealed that he used to walk on foot to training, even though it could take more than an hour, without even getting a salary due to the fact that the club was non-professional and they were in a low division. His club then also refused funds from the Delta State government.

Emmanuel Emenike began his career with Delta Force although he didn’t sign a professional contract until he joined South African National First Division team Mpumalanga Black Aces in January 2008 and made his debut against Dynamos F.C.

In May 2008, Emenike was transferred to First Division team F.C. Cape Town, although he did played barely one year and Karabükspor came looking for his service and he signed with the Turkish club in 2009.

He joined another Turkish club, Fenerbahçe on May 25, 2011, for an undisclosed fee, believed to be around 9 million euros.

Due to the match fixing scandal involving Fenerbahce and Emenike, the Nigerian striker was sold to Spartak Moscow for a fee of around €10 million

In August 2013, Emenike returned to Fenerbahçe for a fee worth around €13m (£10.2m). He was noted to be “thrilled” and was quoted as saying Fenerbahce had always been a dream for him, and he had returned to perform for the fans and win championships.

On January 31, 2016, Emenike signed for English Premier League side West Ham United on loan until the end of the season with an option to make it permanent. He also played for Olympiakos, Las Palmas and Belgium side Westerlo, where he retired.

Emmanuel Emenike is a former Nigerian footballer who plays as a striker. He has an estimated net worth of $5 million.

During his playing days, the striker played for top clubs in Europe including West Ham United and Fenerbahçe.

Emmanuel Emenike got married to the former Most Beautiful Girl in Nigeria winner, Iheoma Nnadi. The wedding took place in 2016, with lots of celebrities in attendance.

The couple welcomed their first child in August 2017, and had their second child on March 13, 2020. Emenike is the cousin of US international and West Bromwich Albion striker Daryl Dike.

The former Fernabache forward is battling with health issues, as he posted a video of himself receiving treatment with a nurse attending to him in April 2022.

“God is good, the pain is too much for me and my heart cannot carry it anymore,” Emenike captioned the video he posted on his official Instagram account.