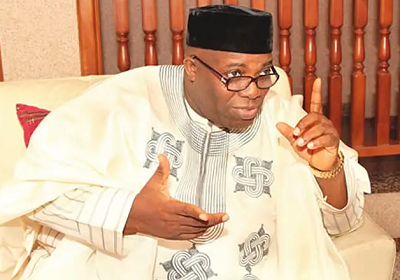 Adedoyin Ajibike Okupe, born March 22, 1952, better known as Dr. Doyin Okupe, is a Nigerian physician, politician, and co-founder of Royal Cross Medical Centre. He was the National Publicity Secretary of the National Republican Convention (NRC) and the SA on Media & Publicity for Olusegun Obasanjo.

Okupe was born in Iperu, Ogun State, the South West geopolitical zone of Nigeria. He is the son of Chief Matthew Adekoya Okupe, a banker with Agbonmagbe Bank.

His brothers are Kunle Okupe, Owo Okupe, Wemi Okupe, and Larry Okupe, while Aina Okanlawon and Bisola Ayeni are his sisters.

Doyin Okupe is a medical doctor who also participates in party politics. He was also the publisher of Life Mirror, a health publication.

He was the Royal Cross Medical Centre’s Managing Director (MD).

According to Olusegun Osoba, in a July 2019 interview with The Nation (Nigeria), Okupe and Dr. Seyi Roberts rescued the life of his gatekeeper from a gunshot wound to the head on the night of August 23, 1994.

He was arrested during General Sani Abacha, and then disqualified from participating in United Nigeria Congress Party (UNCP) primaries; later, he was a People’s Democratic Party (PDP) governorship aspirant in Ogun State.

Okupe was a House of Representatives candidate for the National Party of Nigeria (NPN) in the 1983 Nigerian parliamentary election during the Second Nigerian Republic.

He was one of the NRC’s observers at the National Electoral Commission’s offices for the collation of the results of the 1993 Nigerian presidential election (NEC).

On October 3, 1996, Okupe was detained by the military administration of General Sani Abacha.

Later, during Abacha’s aborted transition program in March 1998, he was among the politicians barred from running in the United Nigeria Congress Party (UNCP) primaries.

Okupe was named Special Assistant on Media and Publicity to President Olusegun Obasanjo at the start of the present Fourth Nigerian Republic.

Later, in 2002, he stood for governor of Ogun State as a candidate in the People’s Democratic Party (PDP) primaries, and was a prominent contender alongside Gbenga Daniel.

In July 2017, he declared his desire to leave the PDP and join the Accord Party, but the Accord Party fired him in September 2018 for accepting to be the Chairman of Bukola Saraki’s Campaign Media Council for the PDP’s 2019 presidential primary.

He later rejoined the PDP and became a spokesman for Atiku Abubakar, the PDP’s presidential contender in the 2019 Nigerian presidential election.

Doyin Okupe is a Nigerian physician and politician with an estimated net worth of $5 million. He has been in government for some years, worked with former presidents, Olusegun Obasanjo and Goodluck Jonathan.

Doyin Okupe is happily married to Aduralere Okupe, and they have children together. Ditan Okupe and Bolu Okupe are his sons.

Okupe and his wife, Aduralere, were found to have tested positive for COVID-19 on April 23, 2020, but have since recovered.

His other son, Bolu Okupe, who lives in Paris, came out as gay on his Instagram profile in January 2021.