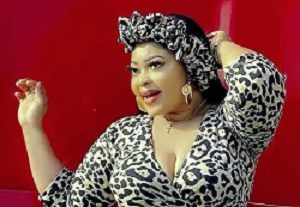 Biodun Okeowo, born December 26, 1971, also known as Omo Butty or Omoborty is a Nigerian actress, filmmaker and chubby model known for her curvy body shape. She was born in Fadeyi, Lagos State but hails from Remo, Ogun State. She came into limelight in 2007 after appearing in the movie Tolani Osinrin.

Her father was a member of the Awarawa Theatre Group, which included movie legend Jide Kosoko.

She graduated from Lagos State University with a degree in Communication Arts (LASU).

Biodun Okeowo interned at Lagos State Television (LTV 8) where she developed an interest in acting.

Ray Eyiwunmi was her coach when she began her acting career in 2006. Eniyemi was her first film to star in. But it was the film Tolani Osinrin that catapulted her to fame in 2007.

She got the name Omo Butty after she produced her debut film and has since created films such as Are, Folashade, Aturota, and many others.

Victoria Beauty Palace, her company, was founded in 2015. In 2010, she received the Global Excellence Awards’ Movie Personality Of The Year honor.

Biodun Okeowo is a Nigerian curvy actress, model and filmmaker. She has an estimated net worth of $400,000.

Biodun Okeowo is not yet married. While still at university, she gave birth to her first child, a son.

She claimed that after giving birth to her first kid, she had to resort to producing snacks like doughnuts and chin-chin to make ends meet.

Despite the fact that she and her spouse had another child, a daughter, they are currently divorced. However, she is still yet to remarry.

According to rumors, she divorced her spouse due of a hidden connection with Kunle Adegbite. Although she is yet to speak out about her failed marriage.