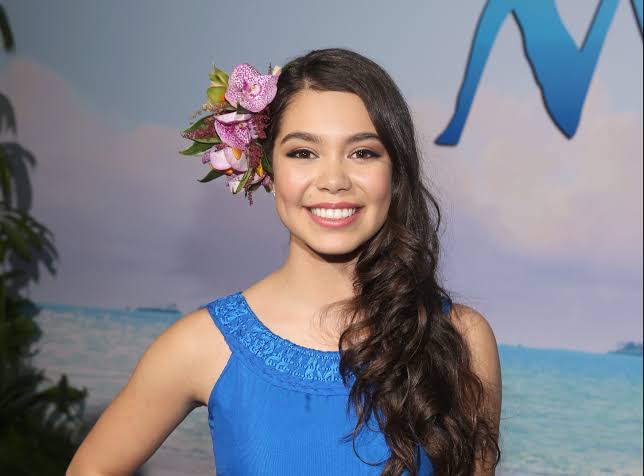 Chloe Auliʻi Cravalho, born November 22, 2000, better known as Auliʻi Cravalho, is a talented American actress and singer. She made her professional acting debut in 2016 as the voice of the titular character in the 2016 Disney 3D computer-animated musical feature film Moana.

Auliʻi Cravalho performed the national anthem at the National Memorial Day Concert in May 2017.

Auli’i Cravalho was born in Kohala, Hawaii, to parents Dwayne Cravalho and Cathleen Puanani Cravalho, who are of mixed Irish, Portuguese, Chinese, and Puerto Rican ancestry.

She was in her first year of high school, residing in Mililani, Hawaii with her mother, and participating in the Kapalama campus of Kamehameha Schools’ glee club while singing soprano.

In the beginning, according to Cravalho, “there were already so many fantastic submissions that I didn’t think I needed to try out” for Moana.

She was found, though, through a charity video competition, and an Oahu talent agent brought her to Los Angeles to try out for the part.

According to casting director Rachel Sutton, out of hundreds of actress candidates, Cravalho was the last to try out.

She was announced to have been cast in the NBC drama Rise’s pilot in February 2017, and on May 4 the show was ordered to series.

The show debuted on March 13, 2018, however NBC canceled it on May 15 owing to poor viewership.

She performed the national anthem at the National Memorial Day Concert in May 2017.

The first Hawaiian-language Disney movie will feature Cravalho reprising her role as Moana, the actress revealed in November 2017.

She appeared in Brett Haley’s Netflix film All Together Now in 2020.

Auli’i Cravalho was chosen to play the title role in the 2023 debut of the animated comedy-adventure series Hailey’s On It.

Auli’i Cravalho is an award-winning American actress who has a net worth of around $1.5 million. She starred in the famous animated film, Moana.

Auli’i Cravalho publicly revealed that he is bisexual and has a penchant for women in April 2020. She announced in June 2021 that she had been accepted to Columbia University and that she would major in environmental science there.