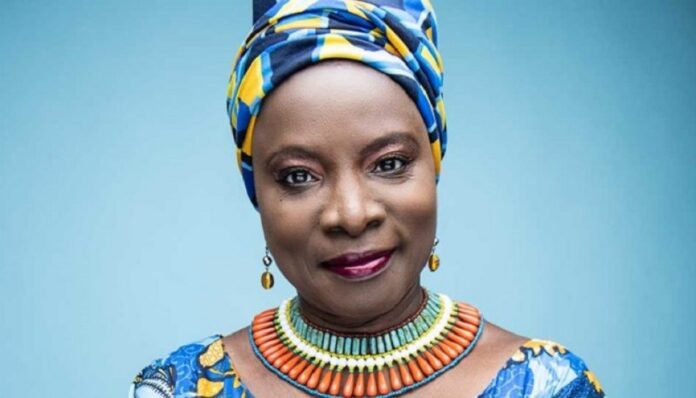 Angelique Kidjo was born into a family of nine in Ouidah, Benin. Her father is of Fon ancestry, while her mother is Yoruba. She is bilingual as a result of her background, speaking French, English, and three other African languages, including Fon and Yoruba.

Her father was a musician, and her mother was a dancer and theatrical director, so both of her parents were interested in music.

As a result, Kidjo began performing with her mother’s theatre group at the age of six, giving her an early passion for traditional music and dance.

She also sang in her school band, Les Sphinx, and then in her brother’s rock rhythm and blues band when she was older.

Kidjo rose to prominence as a teenager after her rendition of Mariam Makeba’s Les Trois Z was broadcast on national radio. She was already a professional vocalist at the age of 20.

She moved to Paris in 1983 because political upheaval in Benin stopped her from working as an independent artist in her home country.

She began her career as a backup singer in a few local bands. Then, in 1985, she joined Jasper Van’t Hof’s Euro-African jazz/rock band Pili Pili as the lead singer.

Angelique then released her first album, Pretty, in 1988. It was with Ekambi Brilliant, a Cameroonian producer, and her brother Oscar.

It included the songs “Ninive” and “Gbe Agossi,” a tribute to one of her idols, vocalist Bella Bellow. As a result of the album’s success, she was able to tour throughout West Africa.

She went on to record the solo album Parakou for the Open Jazz label in the 1990s. She was then discovered by Island Records’ Chris Blackwell, who signed her in 1991 based on both her solo album and her work with Pili Pili.

She also recorded four albums for Island before Blackwell left the label. Columbia Records in New York signed her in 2000, and she made two albums there.

She went on to make more hit albums after that.

Spirit Rising: My Life, My Music was her debut book, which she published in 2014. She also published a book called La voix est le miroir de l’ame.

Angelique Kidjo is a talented Beninese singer, songwriter, actress. She has an estimated net worth of $5 million.

Angelique met Jean Hebrial while in Paris. Jean is a musician and producer from France who has helped her with musical projects. They married in 1987 as a result of their intense connection.

Then, in 1993, they welcomed their daughter, Naimat Hebrial Kidjo, into the world.

Naimat is an actress, writer, whom the mother described as her source of inspiration.

Angelique Kidjo is an activist who is dedicated to the education of women and girls. She co-founded The Batonga Foundation in addition to being a UNICEF international goodwill ambassador and promoter of various projects.

Its main goal is to provide young women and girls in Benin with the knowledge and skills they need to become change agents in their own lives and communities.

The name Batonga was inspired by one of Kidjo’s songs. In addition, the program has a number of partners who help it achieve its goals.