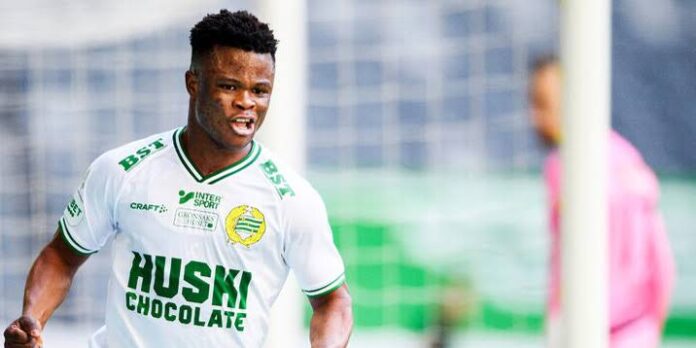 Akinkunmi Ayobami Amoo, born June 7, 2002, professionally known as Akinkunmi Amoo, is a Nigerian professional footballer who plays as a midfielder in the Danish Superliga for F.C. Copenhagen. He was born in Ibadan, in the South Western region of Nigeria, and he’s of the Yoruba ethnicity.

Amoo is a prolific midfielder known for his pace and ability to score goals from outside the 18-yard box.

Akinkunmi Amoo signed a five-year deal with F.C. Copenhagen in the Danish Superliga.

Akinkunmi Amoo was born in Ibadan where he grew up, and started playing youth football at Brightville Academy.

He moved to Lagos to join Sidos FC while he was a teenager.

Amoo began his professional senior career with Hammarby IF after he was transferred on June 8, 2020 after his 18th birthday.

He signed a four-year contract with the Swedish club which reportedly turned down a move to Monaco and AC Milan.

Amoo featured in all six games as Hammarby IF reached the play-off round of the 2021–22 UEFA Europa Conference League.

His electrifying performances throughout the year attracted interest from top European clubs like Ajax, Leicester and Valencia.

On January 31, 2022, the prolific midfielder signed a five-year deal with F.C. Copenhagen in the Danish Superliga in a  fee reportedly around €4.4 million, plus bonuses and a sell-on clause, making it a record breaking transfer for Hammarby.

Akinkunmi Amoo began his international career with Nigeria in the 2019 Africa U-17 Cup of Nations, where he scored in his debut in a 5–4 group stage win against Tanzania.

He was also part of the Nigerian squad that got knocked out in the round of 16 during the 2019 U-17 World Cup.

Akinkunmi Amoo is a talented and skillful footballer who has an estimated net worth of $5 million.

Despite being a popular footballer playing for Danish club, F.C. Copenhagen, the Nigerian international has not revealed information regarding his personal life.

Amoo has not flaunted any girl on his social media platforms as his girlfriend, so we assume she is not in a relationship.

The young player is focusing on playing and enjoying football and hopes to play for some of the top European clubs.