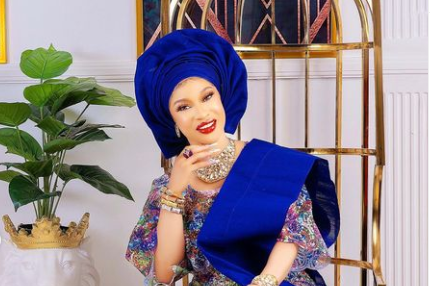 Tonto Charity Dikeh, born June 9, 1985, is a Nigerian actress, singer, songwriter, humanitarian, social media influencer, and brand influencer. She was born in Obio-Akpor, a LGA in Rivers State, and is of Ikwerre descent. She lost her mother at the age of 3 and was raised by her step-mother, who has two children.

She is enjoying a successful acting career, having starred in numerous Nollywood movies including Strength to Strength (2008), Missing Child (2009), Native Son (2009), Dangerous Beauty (2009), and many others.

Tonto Dikeh was born in Obio-Akpor, a local government area in Rivers State where she hails from, and she is of Ikwerre descent. She lost her mother at the age of 3 and was raised by her step-mother, who has two children.

While growing up, Tonto Dikeh always had the dream of becoming a popular actress, and her dreams came to pass after years of hard work.

She had her primary and secondary education in Rivers State before she proceeded to Rivers State University of Science and Technology where she graduated with a degree in Petrochemical Engineering.

Tonto Dikeh has starred in several Nollywood movies playing key roles and never failed to deliver an outstanding performance with excellent ability in interpreting any script that comes her way.

Having hit the spotlight and become successful in her acting career, Tonto Dikeh decided to pursue a music career. Prior to that, she was featured in a music video for Amaco Investments, alongside Patience Ozokwor.

Tonto Dikeh broke into the music industry with her debut singles “Hi” and “Itz Ova,” the latter of which features Snypa. She was signed by D’banj on June 13, 2014 to DB Records, but it didn’t go well as Tonto announced her departure from the label in March 2015.

On August 27, 2000, Tonto Dikeh launched her foundation, the Tonto Dikeh Foundation, with the vision and passion of making life better for all displaced and underprivileged women, girls, youth, and children in Africa, regardless of their political, religious, and cultural differences.

The foundation also aims at organizing regular sensitization programs and symposium discussions that will bring sanity and civility to the black race; by addressing issues that affect women, such as gender issues, rape, empowerment, climate change, and child rights.

Tonto Dikeh played a key role after she was featured in a movie titled Dirty Secret, which generated controversy among Nigerians due to its inclusion of adult scenes.

The net worth of Tonto Dikeh is estimated at $2 million. The beautiful actress, model, and brand influencer makes money on her movies, music, and endorsement deals.

Tonto Dikeh is one of the richest Nigerian actresses, having appeared in several Nollywood movies playing key roles.

Tonto Dikeh got married to Olakunle Churchill in a traditional marriage, which was held in August 2015, and in February 2016, she gave birth to their son, Andre Omodayo Churchill, also known as King Andre. However, they separated and moved in different ways.

Dikeh later started dating Joseph Egbri (popularly known as Prince Kpokpogri) and in October 2021, she broke up with Prince Kpokpogri with claims that the ex-lover had an affair with popular Nigerian dancer Janemena.

Tonto Dikeh’s ex-fiancé, Prince Kpokpogri, sued her and the Department of State Security (DSS) in court for allegedly threatening his fundamental human rights. Tonto Dikeh’s ex-lover Kpokpogri said he left Tonto because of her hard smoking and drinking habits.