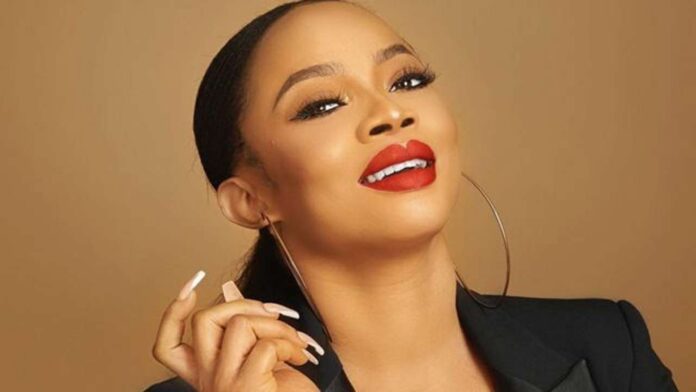 Toke Makinwa, born November 3, 1981, is a Nigerian radio personality, author, model, television host, vlogger and lifestyle entrepreneur. She was born in Lagos State but hails from Ogun State. Toke is known for hosting The Morning Drive on Rhythm 93.7 FM and for her YouTube vlog series Toke Moments.

Toke Makinwa was born in Lagos but originally hailed from Ogun State, both in the South West region of Nigeria. The On-Air Personality grew up in Lagos with her parents and siblings.

After the completion of her secondary school education, Toke Makinwa got admitted into the University of Lagos, where she bagged a degree in English and Literature from the prestigious institution.

Toke Makinwa is a multi-talented television personality who is widely known for her fashion styles and controversies on social media. As a author, she released her book On Becoming in November 2016

Toke Makinwa is one of the top 5 African female show hosts after she made her debut on Rhythm 93.7 FM anchoring The Morning Drive show, as a co-host.

She made her television appearance in 2012 as the host of Most Beautiful Girl in Nigeria (MBGN) beauty pageant, the show which was broadcasted live across Nigeria.

Token Makinwa rose to become one of the sought-after media personalities in Nigeria. She co-hosted Flytime TV’s 3 Live Chicks, alongside Tosyn Bucknor and Oreka Godis.

She took her career to another level and launched her YouTube vlog series Toke Moments, which has become the fans favorite.

In 2013, Toke was honored as she won Nigeria Broadcasters Award for Outstanding Female Presenter of the Year and bagged nomination for ‘Radio OAP of the Year’ in the Nigeria Entertainment Awards.

Toke Makinwa has anchored several shows including The Voice Nigeria season three alongside Nollywood actress, Nancy Isime in 2021. On October 16, 2022, she was unveiled as the host of Gulder Ultimate Search season 12.

Toke Makinwa is a Nigerian television personality, actress, model and fashion entrepreneur. She has an estimated net worth of $3million.

Toke Makinwa lost her parents to a fire accident when she was 8 years old. In November 2016, she released her memoir On Becoming. The book talks about her personal struggles and addresses the betrayal of her ex-husband, Maje Ayida.

She went on a book tour around Nigeria, South Africa, the US, UK and some parts of East Africa to promote the book.

Toke Makinwa was married to Maje Ayida. They got married in 2015, although the marriage didn’t last long as they separated on October 5, 2017 by a Lagos High Court with claims that the estrange committed adultery.