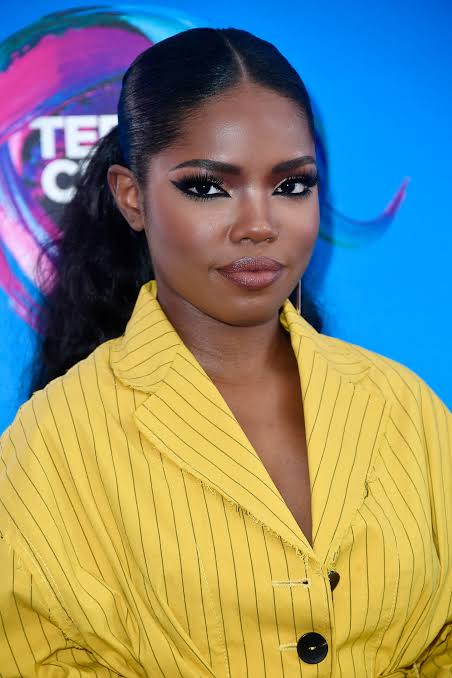 Ryan Destiny is a Michigan-born American Actress, songwriter and singer. She is a well known thespian who cut her teeth in the entertainment scene for her roles as Alexandra Crane in the Fox musical drama, Star and Jillian in the sitcom Grown-ish.

Ryan is one of the trio of the musical group she form at age 12 that were finalist in the 2010 America Got Talent.
She has featured in many music videos by top class artists in the US which include Big Sean, Justin Bieber and Doja Cat.

Ryan Destiny was born in Detroit, Michigan, United States as Ryan Destiny Irons on January 8, 1995, to parents Dawn Irons, and Deron Irons. Her father who has been very active in the world of music was a member of the 90s R&B group Guesss.

She went to West Bloomfield High School for her high school education. Destiny took part in a singing competition in January 2011, of which she eventually won to attend the red carpet premiere of Justin Bieber’s Never Say Never.

Destiny, then 12, formed the musical trio New Limit in junior high. The trio, managed by her mother Dawn, auditioned for America’s Got Talent in 2010 and made it to the finals before deciding it was not for them. Destiny had signed with Universal Republic by 2011.

Destiny and her manager held auditions for a new group called “Love Dollhouse” after the group split. All Def/Capitol Records, a label collaboration with Russell Simmons, Steve Rifkind, and Brian Robbins, signed the trio. “Can I,” the group’s debut single, was released. The band split up in 2015.

Destiny announced plans for a solo EP in 2016. She released her first single “The Same” in 2018, followed by a remix featuring rapper Tobi Lou the following year. In 2020, she released her second single, “Do You.”

Destiny made an appearance in an episode of the web series The Wannabes Starring Savvy in 2010. She traveled to Los Angeles with her mother in 2011 to begin auditioning for projects.

She appeared in several episodes of Low Winter Sun, a Detroit-based crime drama, in 2013. Destiny later starred in the indie film A Girl Like Grace alongside Garcelle Beauvais, Meagan Good, and Raven-Symoné. The film, directed by Ty Hodges, premiered at the Los Angeles Film Festival in June 2015.

Destiny was originally cast as Tiana in Lee Daniels’ hit musical drama Empire, but she was unable to accept the role due to her contract with All Def Music.

Destiny was cast as Alexandra in Daniels’ series Star in December 2015, opposite Queen Latifah. The show debuted on Fox on December 14, 2016 and concluded after three seasons in 2019.

Destiny was cast as Claressa Shields in Flint Strong, a Universal Pictures biopic written by Barry Jenkins and directed by Rachel Morrison, in November 2019.

Ryan Destiny has been so excellent in the way she interpretes roles and at such, she has been nominated for awards like: Teen Choice Awards in 2017 and 2019, including Choice Breakout TV Star and Choice Drama TV Actress.

From late 2017 to 2022, Ryan Destiny was in a relationship with actor Keith Powers. On January 18, 2022, People Magazine announced the breakup after four years of relationship.

Ryan Destiny builds up her financial prowess through her career as an actress and singer. Ryan has an estimated net worth of $3 million.