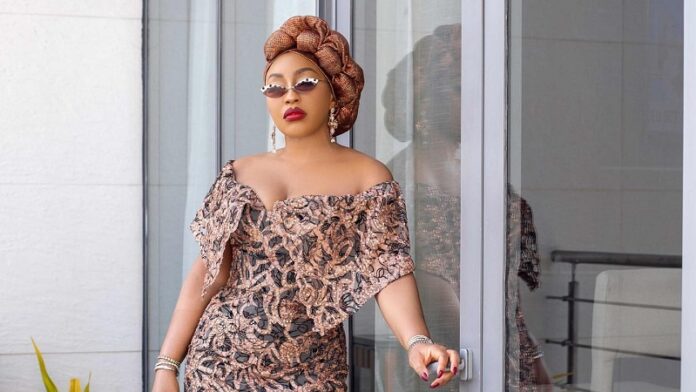 Rita Uchenna Nkem Dominic Nwaturuocha , born July 12, 1975, is an iconic Nigerian actress, entrepreneur, and media personality. She is one of the backbones of Nollywood that has dazzled on screen for over two (2) decades now. Rita Dominic has not only garnered love from the esteem viewers of Nollywood through her display capabilities, but also from her unwavering contributions to the propulsion of the Nigerian movie industry to higher heights in the world of entertainment.

Rita Dominic was born in Mbaise LGA of Imo State, Nigeria on the 12th of July, 1975. She is from the Royal Nwaturuocha Family of Aboh, Mbaise local government area in Imo State and the youngest of four children.

Her parents who are late were professionals in the health sector. Her father was a medical doctor, and her mother a nursing officer.

Immediately after her secondary education in Akwa Ibom State, she got admission to study Theatre Arts in the University of Port Harcourt, Rivers State where she graduated with a Bachelor of Arts (Hons) Degree in Theatre Arts in 1999.

Rita Dominic started performing as a child when she was always acting in school plays and children’s television shows in Imo State.

She starred in her first movie titled “A Time to Kill’ in 1998. Since then, Rita has been so outstanding in her career that six years after she cut her teeth in the movie industry, she won the City People Awards in 2004 as the Most Outstanding Actress.

Rita Dominic has starred in over 100 Nollywood movies mostly playing the leading role. Today, Rita Dominic is probably the most decorated actress in the Nollywood.

One of such feat was in 2012, where she won the Africa Movie Academy Award for Best Actress in a Leading Role.

2013 ELOY AWARDS for Female Producer of the Year

She is one of the finest and dynamic actresses in the Nigeria movie industry and one of Nigeria’s highest-paid actresses. Presently, she is a GLO Ambassador and the CEO of Rita Dominic Productions.

Fidelis Anosike is the founder of the Folio Media Group, a multimedia company which owns one of Nigeria’s oldest newspaper, Daily Times that he bought in 2005 and controls outfits like Creative Africa Xchange (CAX) etc.

Fidelis Anosike is a graduate of Creative Arts from the University of Benin and a business degree holder from Harvard Business School.

As a businessman, he has spearheaded many events like the Miss Nigeria Beauty Pageant, The Times Heroes Award, and Nigeria Our Heritage Grand Book.

The duo were first seen together online during the lockdown year in December when she shared a picture of two of them in twinning nightwear, the first time this dazzling actress has revealed her lover’s identity.

This union was officially confirmed and made public when the couple announced their decision to marry in early April, 2022 that kicked off with bridal shower and later sealed with a ground-breaking traditional wedding on Tuesday, April 19, 2022 that was graced with numerous Nollywood stars glamorously dressed.

The screen diva, Rita Dominic has no child of her own yet though she revealed in April 2021 that she has youngsters she deals with.

Notwithstanding, she is hoping to have her own kids someday as her teaming fans cannot wait to see her being pregnant in the coming months.

Rita Dominic is one of the most Decorated Nollywood star and at such, one of the highest earning Nigerian movie superstar. Her net worth is estimated to be US$6 million.