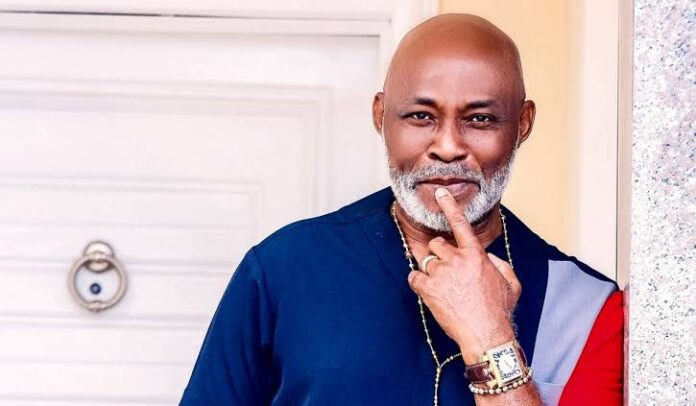 Richard Mofe-Damijo who is popularly known as RMD was born in the Aladja community of Delta State’s Udu Kingdom.

He went to Anglican Grammar School, Midwest College in Warri, and was active in the Drama Club there.

In order to further his education, he enrolled in the University of Benin, where he studied Theatre Arts.

Mofe-Damijo returned to the University of Lagos in 1997 to pursue a legal education, and she earned her law degree there in 2004.

Following his graduation from the university, RMD appeared in the soap opera Ripples, but he became more well-known for his role as the evil Segun Kadiri in the competing drama Checkmate.

Prior to that, he worked as a writer for Quality, Metro Magazine, and Concord Newspapers.

His first movie for which he was given a writer/producer credit was Out of Bounds.

RMD earned the prize for Best Actor in a Leading Role at the first African Movie Academy Awards in 2005.

He and Nigerian journalist Mimi Fawaz co-hosted the 2016 GLO-CAF Awards on January 5, 2017.

He received a Black Star Honor at the Rhymes on Da Runway in Gold Coast, Ghana, on December 8, 2021.

In 2008, Emmanuel Uduaghan, the then governor of Delta State appointed Richard Mofe-Damijo as his special adviser on culture and tourism.

In 2009, he was named Delta State’s commissioner for culture and tourism in Nigeria. His term was over in 2015.

Richard Mofe-Damijo (RMD) has an estimated net worth of $7 million. He is one of the richest and influential Nollywood actors.

Richard Mofe-Damijo was married to May Ellen Mofe-Damijo “MEE”, a journalist, publisher, and talk show host who sadly passed away in 1996.

Mofe-Damijo remarried TV personality Jumobi Adegbesan who later quit her job as a television presenter to start a business.

RMD has five children, three with her ex-wife while two with her current wife.