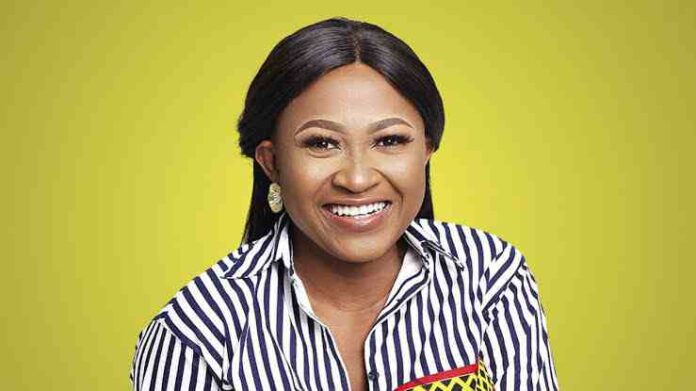 You are about to read Mary Njoku biography, age, state of origin, career, family, husband, net worth and many more.

Mary Njoku is a Nigerian actress, film producer and Director General of the award-winning Lagos-based film house, ROK Studios, in Nigeria, which was recently acquired by French TV giant, CANAL+.

She produced and starred in Thy Will be Done, Husbands of Lagos; starred and directed Single Ladies and Festac Town.

Mary Njoku is the sixth child in a family of 8, was born in Amuwo Odofin, Lagos State, Nigeria. Mary Njoku hail from Nsukka, Enugu State.

She holds a diploma in Computer Science. From 2010, Njoku attended Lagos State University where she studied for a degree in English Language.

In 2012, Mary Njoku attended London Film Academy in the UK funded by her husband where she did a course on Producing: Movie Magic Budgeting & Schedule From childhood, she had a passion for acting and started acting on-stage when she was in Secondary school.

Mary Njoku joined the Nollywood industry in 2003, at the age of 17. Mary Njoku unlike many, thinks education is just a pass time as the most important thing is your skills

Mary Njoku made her acting debut in the 2004 Nollywood movie ‘Homesickness’, which she featured alongside Chioma Chukwuka Akpotha.

Between 2011 and 2013, Mary Njoku produced iROKotv, a YouTube platform that featured interviews with Nigerian celebrities, as well as coverage of Afrobeats and Nollywood events.

In 2015, Mary Njoku became Chief Content Officer at IROKO Partners. By March, she held her first world premier for her film Thy Will Be Done at the BFI IMAX London, the first ever Nollywood film premiere in IMAX.

In August 2018, Mary Njoku produced the movie Nwanyioma, where her role required her to completely shave her head.

In August 2013, Njoku founded ROK Studios. Since its launch in 2013, ROK has produced over 540 films and 25 original TV series, including Festac Town, Single Ladies, Body language, Losing Control and Husbands of Lagos.

In 2016, Njoku launched ROK on Sky, a network airing across the UK. To celebrate the launch, some of her Nollywood colleagues attended the launch gala which took place at the Nigerian High Commission in the UK.

Njoku also launched ROK on DSTV, a network airing across Africa, in the same year.

ROK2 delivers content showcasing the origins of Nollywood, while ROK3 showcases a variety of Ghanaian talent, and has a music channel feature in addition to the 24hr movie and series selection.

In 2019, Njoku oversaw the acquisition of ROK to CANAL+, the largest international deal to-date for a Nollywood brand.

Mary Njoku is a Nigerian actress and film producer. He has an estimated net worth of $500,000.