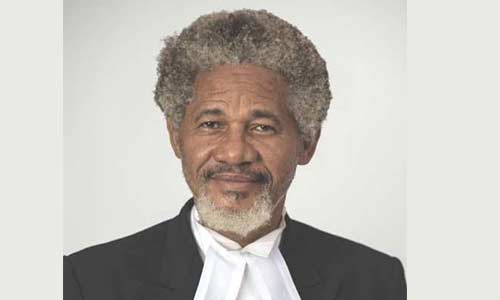 Malcolm Omirhobo, is a Nigerian human rights lawyer who came into the spotlight following her traditional dressing as a Juju Priest in the Supreme Court. He was born in Lagos State but originally hailed from Delta State, where he had both his primary and secondary education.

Malcolm Omirhobo was born and raised in Lagos, Nigeria, and his date of birth has not been revealed so his real age is not available at the moment.

Malcolm Omirhobo has been awarded the “symbol of hope/humanitarian services” Ahmadu Bello platinum medal by the national association of Northern Nigerian Students (NANNS).

He has additionally filed a lawsuit against the FG, AGF, and CBN regarding the Arabic wording on the naira.

On Thursday, Malcolm Omirhobo, a human rights lawyer from Lagos, appeared before the Supreme Court while dressed traditionally.

The Delta state attorney disrupted the proceedings when he arrived at the court dressed as “half a lawyer and half a traditionalist.”

He adorned his wig with two black feathers and painted a white circle over his right eye. Omirhobo tied a charm around his neck and put on his white shirt and jabot, the proper dress for a lawyer.

The attorney asserted that he dressed in that manner to court in order to exercise his fundamental rights following a recent Supreme Court decision that authorized the wearing of the hijab in schools.

The hijab was outlawed in schools by a Lagos high court in October 2014, but that ruling was overturned by an appeals court in July 2016.

Malcolm Omirhobo is a famous Nigerian human rights lawyer, although his net worth has not been estimated yet.

The Nigerian lawyer broke the internet when he dressed in a traditional native doctor attire to the Supreme Court.

There are no information regarding the personal life of Chief Malcolm Omirhobo, as the lawyer doesn’t like disclosing information about his family online.