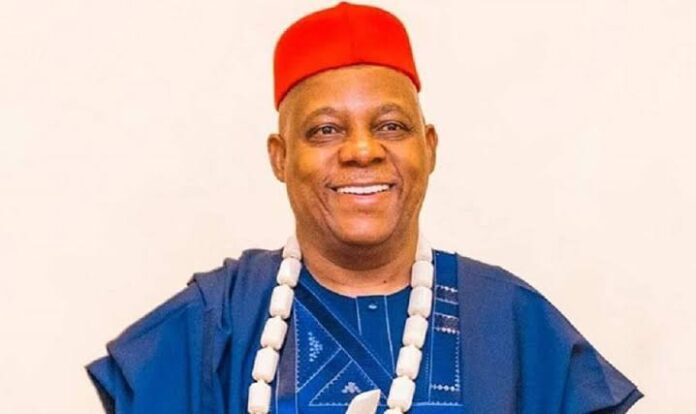 Kashim Shettima Mustapha, born September 2, 1966, better known as Kashim Shettima, is a prominent Nigerian banker and politician. He is a member of the All Progressives Congress and will run as Bola Tinubu’s running mate in the 2023 presidential election.

Since 2019 he has represented Borno Central as a senator. From 2011 to 2019, he presided as the governor of Borno State.

Shettima completed his secondary education in 1983 at the Government Science Secondary School, Potiskum (now in neighboring Yobe State), after attending Lamisula Primary School in Maiduguri from 1972 to 1978.

He proceeded to Government Community Secondary School in Biu in the southern part of Borno State from 1978 to 1980, and Lamisula Primary School in Maiduguri from 1972 to 1978.

In 1989, he graduated from the University of Maiduguri with a BSc in Agricultural Economics.

From 1989 to 1990, he completed his one-year National Youths Service Corps (NYSC) requirement in the now-defunct Nigerian Agricultural Cooperative Bank in Calabar, the state capital of Cross River State in South-South Nigeria.

At the University of Ibadan in Southwest Nigeria, he graduated with a Master of Science (MSc) in Agricultural Economics in 1991.

Between 1991 and 1993, Shettima worked as a lecturer in the department of agricultural economics at the University of Maiduguri.

He entered the banking industry in 1993, working as head of the accounts unit for the (now-defunct) Commercial Bank of Africa Limited in Ikeja, Lagos State, Southwest Nigeria.

Shettima served there between 1993 and 1997. He joined the African International Bank Limited in 1997 as a Deputy Manager and advanced to the position of Manager in 2001.

He transferred to the Zenith Bank in 2001 and is now the manager of Maiduguri’s main branch.

Prior to leaving the Zenith Bank in 2007 as a General Manager after being appointed Commissioner for Finance in Borno State.

Shettima was an agricultural economist at the Commercial Bank of Africa’s Ikeja office in Lagos State (1993-1997).

He later worked as a branch head and deputy manager at the African International Bank Limited’s Kaduna branch (1997–2001).

In 2001, he was named branch head and deputy manager of the Zenith Bank’s Maiduguri office. Five years later, he was named general manager.

Shettima was named Commissioner of the Borno State Ministry of Finance and Economic Development in the middle of 2007.

Later, under his predecessor as governor of Borno, Ali Modu Sheriff, he was appointed Commissioner in the Ministries of Local Government and Chieftaincy Affairs, Education, Agriculture, and later Health.

He worked as a Commissioner in 5 Ministries from 2007 to 2011. Engineer Modu Fannami Gubio was chosen as a candidate for governor in the ANPP primaries in January 2011.

Gubio was later killed by attackers, and in February 2011, Shettima won a second primary election.

Kashim Shettima is a renowned Nigerian banker and politician who has an estimated net worth of $3 million.

Kashim Shettima is married to Nana Shettima, and they have three children. The couple are living happily together.