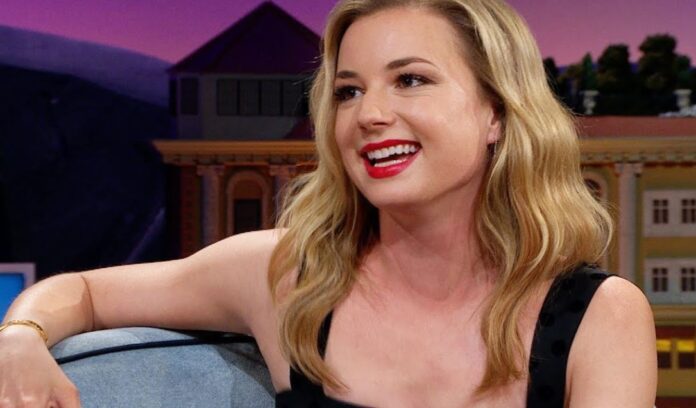 Emily Irene VanCamp is a Canadian actress, born on May 12, 1986 in Port Perry, Ontario, Canada to Robert and Cindy VanCamp. She started working for her father who is an animal nutritionist, delivering food to clients in and around her hometown.

Emily VanCamp landed her first acting job in the children’s horror TV series ‘Are You Afraid of the Dark?’ when she was 13. She first came to prominence for her work with producer Greg Berlanti, who cast her as a series regular on The WB drama Everwood (2002–2006) and the ABC drama; Brothers & Sisters (2007–2010).

VanCamp gained further recognition by portraying the lead role of Emily Thorne on the ABC series, Revenge between 2011 to 2015.

On May 12, 1986 in Port Perry, Ontario, Emily VanCamp was born to Cindy (Mother) and Robert (Father) VanCamp. She started attending dance classes at the age of 3 wanting to become a professional dancer, she convinced her parents to give her permission to attend a summer training dance program in Montreal when she was 11.

At the age of 12, she was admitted into the École supérieure de ballet du Québec in Montréal, the dance training program of Les Grands Ballets Canadiens. So she moved to Montréal and stayed with a local French Canadian family where she learnt French and was fluent in. She learned ballet, jazz, hip-hop, and tap.

Emily VanCamp developed interest for acting when she was just 12 years old after visiting a film set where her elder sister was performing as a ballerina. She landed her first acting job in the children’s horror TV series ‘Are You Afraid of the Dark?’ when she was 13 though she appeared in just one scene with Elisha Cuthbert

In 2000, she played the teenage Jacqueline Bouvier in the television film ‘Jackie Bouvier Kennedy Onassis’. She also appeared as Becky Sue Drummond in the episode ‘Bully for You’ of the series ‘Radio Active’, aired on Canadian television YTV.

In 2001, she played a role in the lesbian-themed film ‘Lost and Delirious’, where she played the role of Jessica Paré’s sister, Allison Moller.

The following year, she was casted by Kevin Williamson in his supernatural drama ‘Glory Days’, where she appeared as Sam Dolan. But her performance in the American drama television series ‘Everwood’ where acted as Amy Abbott was critically lauded.

The series ‘Everwood’ was created by Greg Berlantia and it made Emily a rising star which was aired on The WB spanning over four seasons. After the end of ‘Everwood’ in 2006, she earned a role in the American TV series ‘Brothers  & Sisters’ in 2007. It aired on ABC for five seasons. She played the  role of Rebecca Harper, which was the main role for four seasons and appeared in a guest role in a few episodes of the fifth season.

Emily has also appeared in one episode of ‘Law & Order: Special Victims Unit’, a police procedural, crime drama series. She has been involved in many movies, exhibiting great excellence which has earned her nominations for many awards of which she has won three which are:

The Films she has acted include:

Are You Afraid of the Dark?

The Falcon and the Winter Soldier, etc

VanCamp began dating English actor and Revenge co-star Josh Bowman in late 2011. They got engaged in May 2017, and married the following year on December 15, 2018, three years after they co-starred on “Revenge,” which aired for four seasons from 2011 until 2015.

In 2021, VanCamp announced the birth of their first child, a daughter named Iris, on her Instagram account. Emily VanCamp has three sisters by names; Katie VanCamp, Alison VanCamp and Molly VanCamp.

She speaks French fluently and “feels at home” when she hears the language. She is also an accomplished dancer who studied and trained in ballet, jazz, hip-hop, and tap as a child.