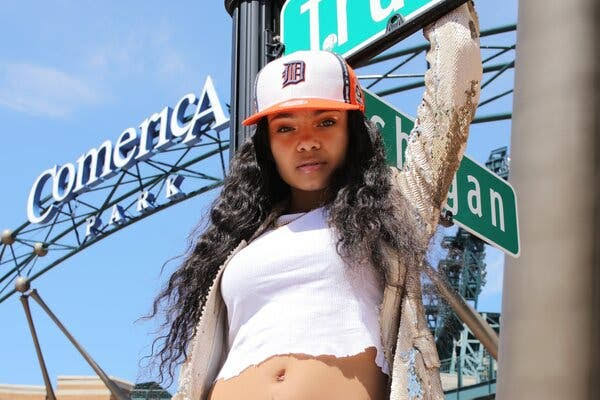 Brooklyn Queen, born July 3, 2005, is a popular American rapper and social media personality. She is a native of Detroit and made her music debut in 2017 with the smash tune “Keke Taught Me.” Brooklyn Queen has always had a passion for music, and at the age of eight, she recorded her first song.

Brooklyn Queen, whose mother is the well-known rapper Nailnotirious Kim, was born on July 3, 2005, in Detroit, Michigan, in the United States.

With the release of the video “Keke Taught Me,” she made her debut as a teen. Within a short period of time, this dance tutorial video with comic Eastside Ivo became a huge hit.

Queen is also well-known for her 2017 first album, “Queens Corner.” Numerous other tracks, such as “Beat the Baby,” “Feeling So Wavy,” “Emoji,” “Rich Girl Problems,” and “Pretty Girl Stuff,” have also been released by the artist.

She has worked with a variety of well-known vocalists, including Rob Base and Salt-N-Peppa, to date.

In addition to music videos, Brooklyn Queen occasionally uploads vlogs. Many of the videos on her channel are about her personal life. The rapper has already performed live on her channel.

She has more than 132k followers on the social media site Instagram, where she is very well-liked. Additionally well-known on Facebook is the American rapper.

She has always had a passion for music, and at the age of eight, she recorded her first song. Queen is also a gifted songwriter who got her start at the young age of five.

Brooklyn Queen is now one of the most well-known young rappers in the nation. She was introduced to the music industry at a young age because she is the daughter of rapper Nailnotirious Kim.

She currently has a contract with BMB Entertainment and regularly releases new music.

Brooklyn Queen is a famous American rapper and social media personality with a net worth of $1 million.

Brooklyn Queen is a devoted follower of the popular singer Beyoncé. She says Beyoncé has inspired her to “cry, smile, and dance,” and she wants her followers to experience the same emotions.

She thinks that if people pursue their aspirations, anything is possible.