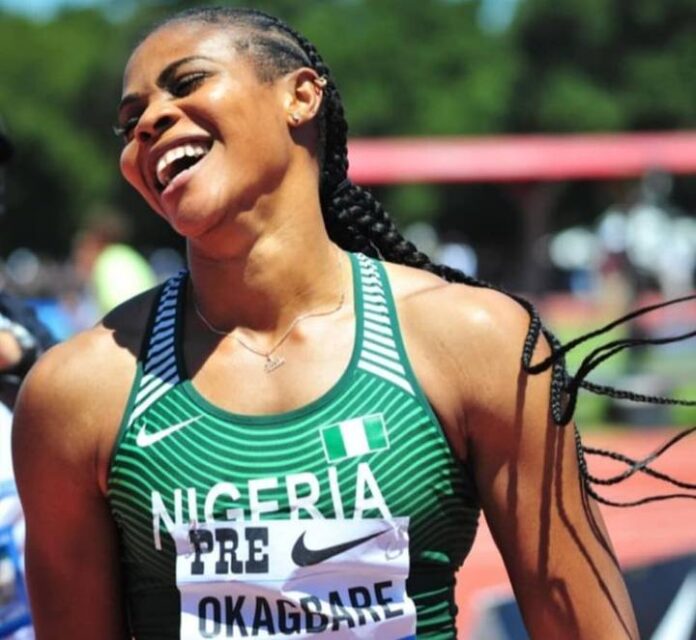 Here is Blessing Okagbare biography with all the information you need to know about the Nigerian female athlete.

Blessing Okagbare has made great impact with her talent, although many don’t know much about her.

In this post you will find untold facts about Blessing Okagbare which you never knew.

Blessing Okagbare-Otegheri born October 9, 1988, better known as Blessing Okagbare, is a Nigerian track and field athlete, a short sprint and long jump specialist. She hails from Delta State and is a winner of Olympic and World Championship medals and holds the women’s 100 meter Commonwealth Games record for the fastest time at 10.85.

Blessing Okagbare was born in Sapele, Delta, Nigeria, to Urhobo parents. Teachers and family encouraged her to participate in sports because of her athletic body.

She began playing football as a teenager in high school and later, in 2004, she became interested in track and field. She competed in a variety of sports early on, collecting medals in the long jump, triple jump, and high jump events at the Nigerian school championships.

On the senior national level, she won a bronze medal in the triple jump at the 2004 Nigerian National Sports Festival. Okagbare made her international debut in the 2006 World Junior Athletics Championships, where she competed in the qualifying stages of both the long and triple jump competitions.

Blessing Okagbare won a silver medal in the women’s long jump as a 19-year-old at the 2008 Summer Olympics in Beijing. She was chosen to compete in the 2009 World Championships in Athletics, but she did not compete in the 100 m or long jump.

Okagbare scored a 100 m/long jump double for the University of Texas at El Paso in the NCAA Women’s Outdoor Track and Field Championship, completing the UTEP Miners’ undefeated college streak that year.

She won the Nigerian 100m title in 2010, clocking a time of 11.04 seconds, and indicated that she was skipping the long jump to focus on the forthcoming African championships.

In 2010, she won the African 100m and long jump titles. She has also competed in the All-Africa Games, the IAAF Continental Cup, and the World Relays.

Okagbare is a top Nigerian athlete with a net worth of $1million.

Okagbare is happily married to Igho Otegheri, a Nigerian footballer. The couple got married in 2014.

Okagbare was suspended after failing a drugs test during the 2020 Tokyo Olympics on July 31, 2021. On February 18, 2022, it was revealed that she had been suspended from athletics for ten years, beginning July 30, 2021, for several violations of World Athletics Anti-Doping guidelines.

Okagbare was banned for ten years after a hearing at the Athletics Integrity Unit found her to have taken both human growth hormone and EPO over a lengthy period of time and to have failed to cooperate with the inquiry.

Blessing Okagbare has impacted the nation with her talent and prowess in athletics having won several accolades.

She has made her country proud by representing the green white green flag.

Okagbare is happily married to the love of her life who is a Nigerian footballer.