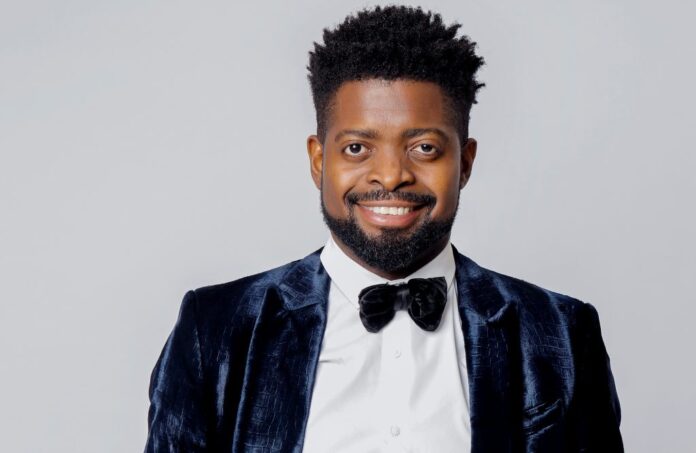 Basketmouth, is a Nigerian Comedian, Actor, TV presenter, Producer and MC. Born on 14 September 1978 as Bright Okpocha in Lagos State, Nigeria, he has organized popular stand-up comedy concerts like Basketmouth Uncensored across the globe.

This made him to form a 7 – member group in 1995 which was made up of him, his friends and brother called “da psychopaths”. They split before they could even release an album or single.

Bright and his brother Godwin immediately formed a group called D Oddz and later added a third member (muyiwa osunrobi). Together, they did a couple of shows but couldn’t break through the music industry as their brand of rap wasn’t accepted then.

Bright Okpocha is from Abia State, Nigeria. He was born in Lagos State where he completed his primary and secondary school in Apapa, Lagos. He then moved on to the University of Benin, Edo State to study for a degree in Sociology and Anthropology with his brother Godwin.

At a time after gaining admission into the university, Basket Mouth and his brother, Godwin performed at a concert in school and they were booed in their performance which made him quit rap music to take up standup comedy.

BasketMouth’s first standup comedy was a disaster because the crowd got irritated and booed him off the stage. Later that year (1999), he returned after a series of research on what brand of comedy could sell in UNIBEN; that was the beginning of Basket mouth’s inception and acceptation into the world of standup comedy.

Basket Mouth’s breakthrough in comedy came in the year 2000, when he went to meet Alibaba in Lagos when he was still a student at UNIBEN. That same year, Basketmouth was billed to perform at Lagbaja’s monthly concert at Motherland, in October 1st 2000. He made his 1st appearance at the renowned Nite of a thousand laughs. After then, it was one performance to another.

In 1999, Basket mouth got involved in events management alongside his comedy acts. He and his friend (Bayo Adekeye) promoted and packaged shows that featured music artists in the likes of Plantation Boiz, Remedies, and a host of other artists. It was during that period that Laff n Jamz was conceptualized.

On the 1st of November 2000, the concept came to reality featuring Ali Baba, Paul Play, Teju babyface, Mandy, Mr. Patrick and a host of others. Immediately after Laff n Jamz in UNIBEN, Ali Baba told Bright to come down to Lagos to expose his skills. It was hard to combine studies and standup comedy but it was done.

After Basket mouth featured Plantation Boiz in 2000, they asked him to anchor a monthly show that was held at their den in Ikeja. It was during that period that Bright impacted the entertainment industry in Lagos.
Things got bigger and better when Bright was invited by Tequila events to perform alongside Julius Agwu on a tour that hit over 30 higher institutions around Nigeria.

Afterwards, Ali Baba introduced him to Opa Williams who then featured him in the now most popular comedy show in Nigeria and beyond (Nite of a thousand laughs).

The name BASKET MOUTH exploded when he featured in international concerts that had the likes of Joe, Boys 2 Men, Sean Paul, Beyonce, Wyclef Jean, Dru Hill, Akon, Snoop Dogg, Ciara, Chris Brown and many others.

His international performance was in Europe (in 2003) after which he stayed off the foreign scene until his debut performance in Atlanta at the Nigerian Reunion in 2006. This performance led to series of performances and bookings in the United States and other countries including South Africa.

Basketmouth appears in the Africa Magic show “My Flatmates”

He launched a record label Barons World Entertainment in 2014.

He released a highlife album titled ‘Yabasi’ as a soundtrack for the movie ‘Papa Benji’ in November 2020. The album featured artists like Ladipoe, BOJ, The Cavemen, Bez, Waje, Duncan Mighty, Flavour and Phyno.

In 2005 and 2006, Basketmouth won the National Comedy Award and the awards for Best Stand-up Comedian of the Year. He was nominated in the 2021 maiden edition of “The Humour Awards Academy” alongside fellow comedian Mr. Funny aka Oga Sabinus.

Basketmouth is blessed with four children, three from his lawfully wedded wife, Elsie Ngowi Uzoma, and another daughter from a past relationship named Amy who is currently residing in the UK with her mum.

Basketmouth met his wife for the first time in 2003 when he went to University of Lagos to promote his first big show, Basketmouth Uncensored. They met again in 2004 at a club in Lagos, they started dating and after many years, they got married on Saturday November 6, 2010 in Ikoyi, Lagos.

Basketmouth had his third offspring from his wife, Elsie in June 2021 though Elsie had three miscarriages before the 3rd child was born.