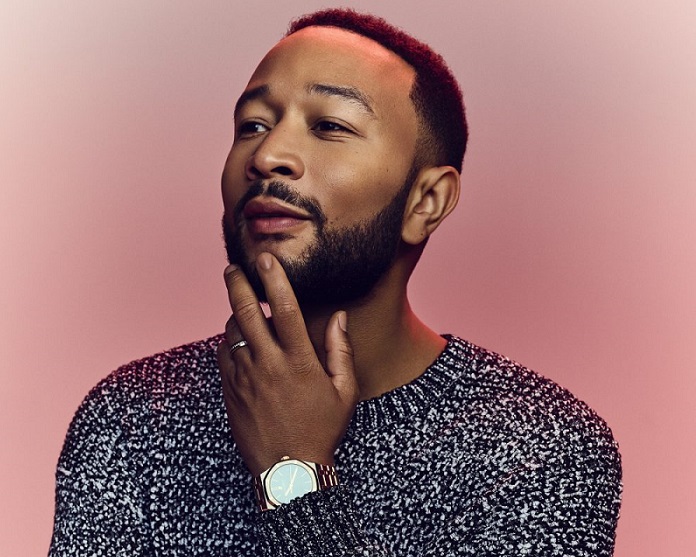 John Legend, by the name of John Roger Stephens (born December 28, 1978 in Springfield, Ohio, U.S.), is an American singer-songwriter and pianist who achieved success in the early 21st century with his fusion of R&B and soul music. He was also a sought-after session musician.

John Legend was born into a musically gifted working-class family. His mother directed a church choir, while his grandmother played organ and his father and brother played drums at the church.

John Legend took piano lessons and sang in the church choir as a child. His parents homeschooled him for several of his elementary-school years. After he graduated from high school, he attended the University of Pennsylvania (B.A., 1999).

He then moved to New York City, working for the Boston Consulting Group by day and playing piano and singing in nightclubs; he sold self-produced CDs

At the age of 12, Legend attended Northern High School in Springfield, Ohio, from which he graduated as salutatorian of his class four years later.

At the age of 15, Legend won a Black History Month essay competition run by McDonalds and was offered admission to Harvard University and scholarships to Georgetown University as well as Morehouse college of which he ultimately decided to attend the University of Pennsylvania.

He graduated with honours with a bachelor’s degree in English with an emphasis on African-American literature.

After graduating from college, Legend worked as a management consultant at the Boston Consulting Group (BCG) and began producing, writing, and recording his own music.

He released two albums within a one year interval: his self-titled demo (2000) and Live at Jimmy’s Uptown (2001), which he sold at his shows.

In 2001 he was introduced to the up-and-coming producer, Kanye West and he began contributing keyboard music and backing vocals to tracks by other artists, among them Alicia Keys, Talib Kweli, and the Black-Eyed Peas. During that time he adopted the stage name John Legend.

Legend released his debut album, Get Lifted on GOOS Service in December 2004.

It featured production by Kanye West, Dave Tozer, and will.i.am, and debuted at number 7 on the US Billboard 200, selling 116,000 copies in its first week and went home with three Grammy Awards for Get Lifted: best R&B album, best R&B male vocal performance and best new artist.

October 2018 brought the release of A Legendary Christmas, a mix of traditional and original holiday songs that included an assist from Stevie Wonder on “What Christmas Means to Me.”

Although A Legendary Christmas was unable to capitalize on its Grammy nomination for best traditional pop vocal album, Legend did earn a Grammy for best rap/sung performance at the 2020 ceremony, sharing the win with DJ Khaled and Nipsey Hussle for their collaboration on “Higher.”

The Musician, Legend met model Chrissy Teigen in 2006 when director Nabil Elderkin introduced the two during her appearance in the music video for his song “Stereo”.

They became engaged in December 2011 and were married on September 14, 2013, in Como, Italy. The 2013 song “All of Me” was written for and is dedicated to her; the music video was reportedly displayed at their wedding.

The couple has a daughter born in April 2016 and a son born in May 2018. Both children were conceived via in vitro fertilization.

In August 2020, Teigen and Legend announced they were expecting their third child by debuting Teigen’s baby bump in Legend’s music video for “Wild.”

In September 2020, the couple lost the child – a son they named Jack – after pregnancy complications.